I’m getting rather tired of the equivocation around this Labour antisemitism issue, so here’s a thread for confused pundits & voters. Some smart people out there have been hoodwinked by dishonest political hacks, or are simply too tribal to accept the difference in the following (written on twitter so apologies for the choppy style)

6) this is *very* different to finding individual policies you hate, or representatives who utter bigotry
7) for a body to be institutionally racist (ironically, a phrase coined by a 90s Labour gov. inquiry) *not every member* is necessarily a racist,nor necessarily is the leader

8 ) for a body to be deemed *institutionally racist*, intention & individual behaviour isn’t primary issue. Rather,outcomes are considered. If the totality of this body’s procedures, institutions& structure lead to *racist outcomes*, then sincerity &individual intent is no defence

9) This is why 90s Lab government’s McPherson inquiry (rightly) deemed police ‘institutionally racist’ after unpunished racist murder of black teenager Stephen Lawrence. They were not calling all police officers racist. Nor did it mean that other UK orgs didn’t suffer racism too

10) so, back to the Labour Party: British jews and their allies are accusing this Labour Party under Corbyn of being ‘institutionally antisemitic’. This means precisely that the party’s mechanisms, procedures and institutions lead to racist outcomes against its Jewish members

11) this does *not* mean every Labour member is racist. It also does not necessarily imply that even Corbyn is (he might be). Rather, it points to the failure of Corbyn’s ship, with him as captain,to steer away from antisemitism. Sincere individual intent is not a condition here

12) what British Jews are (correctly) alleging is that the Labour Party discriminates against them, as a party machine. That the outcomes in that party no longer protect them against racism. This is an *institutional* failure

13) So, back to my opening line about political tribalism: any instinctive defence, “Whataboutery” response,or even allegations of hypocrisy,like “why aren’t you doing more to address racism in your own party?” entirely miss the nature&seriousness of what is (accurately) alleged:

14) British Jews and their allies are *not* in a state of alarm because Labour has individual racists in it (which is bad enough as it is). No. The Tories, Lib Dem’s, Brexit party & others all have bad apples. I repeat: the issue isn’t the existence of bad apples

15) the issue very precisely & seriously is under Corbyn, Labour seems not only to have ignored the problem, or denied it, but in many cases doubled down on it & worse even blamed the victims for reporting it. In other words: the Labour Party machine has been co-opted by racism

16) if one understands the nature& seriousness of the allegation, then one would never reply by saying, by way of example: “but what about Johnson and niqabi Muslim letterboxes?” Bad thing to say, but not evidence that the Tory party *machine* discriminates against Muslim members

17) Also, it’s very important to recognise that criticising ultra-Conservative Muslim dress is a political right, because the ‘choice’ to adopt fundamentalist dress is a valid societal choice that must equally be subjected to scrutiny - like any religious conservativism must be

18) No. Racism is not the same as criticising my religious choices, or lack thereof. You can (politely) criticise my religion, because it’s an idea. All ideas must be scrutinised. But one cannot insult another’s race, without being rightly deemed a racist.

19) Jews are both a people and a religion. European antisemitic tropes against Jews concern their supposed habits as a ‘people’, not their religion. So, its racism to suggest that all Jews are secret greedy capitalists, or have large ugly hooked noses, for example.

20) no serious Jewish voice or organisation has ever said it’s racist to criticise Israel. None. I repeat, none. This is a complete Strawman. I criticise Netanyahu’s policies regularly and know many Jews and Israelis who do so too.

The issue is about
a) traditional European antisemitism flooding back into Labour (eg: East London ‘greedy capitalist’ mural that Corbyn defended)
b) holding Israel’s Jews to higher standard than the world
c) an obsessive focus on Israel for errors that are far worse elsewhere
d) supporting or otherwise praising genocidal, jew-murdering terrorist groups

22) So, people like Tory Baroness Warsi, who seems to have made a career of late out of deflecting over this antisemitism issue in Labour, to attacking her own party instead over “Islamophobia” (sic) totally miss the point:

23) Johnson, or any rogue Tory MP or member, can and do say racist or proto-racist things, but does the party with a Muslim-origin Chancellor really discriminate against Muslims institutionally? Does it then double down & deny its racism (I repeat: blasphemy is not racism)

24) this Muslim believes not. And I have *never* voted Tory in my life, and will not do so this time either. There are problems in the Conservative party, yes. I disagree with them, yes. But they are yet to meet the test of being *institutionally* anti-Muslim.

25) truth is, there is only one major political party right now that has had senior former cabinet members resign over this (correctly) alleged *institutional* racism. There is only one party that is being investigated by the Equalities and Human Rights Commission over said racism. That party is the Labour Party

26) AND THIS IS WHERE I GET UPSET: if Boris Johnson, Jo Swinson, or anyone other party leader, let alone individual MP, had SHARED A PANEL in Parliament with members of the now banned violent NEO-NAZI UK-based TERRORIST group National Action, you would all be going ballistic now

27) yet Corbyn not only shared platforms with jew-killing Hizbollah &Hamas TERRORISTS,he not only called them friends,but took £20K from their sponsor: holocaust denying theocratic dictatorship of Iran. Now..imagine you’re Jewish,and then imagine Corbyn in No.10 as PM. Precisely.

After all the above has been digested & recognised as a unique problem only with Labour right now, then add that Corbyn is a Brexiter too & may bargain away the UK with SNP (allowing Scotland another vote) just to become PM, you’ll get why we say #NoToAppeasement & #NeverCorbyn

After the holocaust we vowed in Europe #NeverAgain - then Bosnia happened. Europe is not immune to repeat-offending. We must never be too arrogant to think we are. Brexit or Remain, we do have choices other than Labour. We must not betray our Jewish cousins over a tribal vote

After all this,if we still choose Labour, at least let’s stop pretending we are “progressives”, or that we care about racism & minorities or that we “listen to victims when they tell us we’re hurting them”. It’s all BS. Just admit that you really don’t give a damn about Jews.

"THREAD – The following is a run-down of @JeremyCorbyn ’s political history. (This is NOT an exhaustive list and is ONLY material produced by this account.) @JeremyCorbyn  is often labelled the unluckiest anti-racist in history. He’s not unlucky, he’s just a racist. " 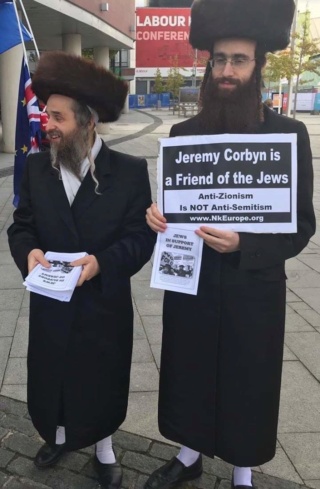 _________________
I have never met a caring sharing and compassionate Tory.
Tories and far right wingers. All liars and only it it for themselves.

I have never met a caring sharing and compassionate Labourite, Labour and far left wingers . All liars and only in it for themselves ! Nuf Sed !

To all our fellow British citizens

This leader — and front page — is addressed not to our usual readers but to those who would not normally read the Jewish Chronicle. In other words, to non-Jews

The vast majority of British Jews consider Jeremy Corbyn to be an antisemite. In the most recent poll, last month, the figure was 87 per cent.

Putting oneself in the shoes of another person, or another group, can be difficult. But we believe it is important — and urgent — that you do that. Perhaps the fact that nearly half (47 per cent) of the Jewish community said in that same poll that they would “seriously consider” emigrating if Mr Corbyn wins on December 12 will give you an indication of what it feels like to be a British Jew at a time when the official opposition is led by a man widely held to be an antisemite.