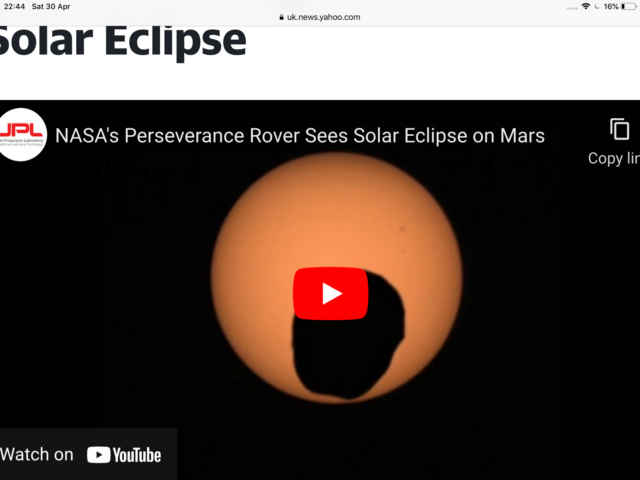 As eclipses go, this one is pretty spectac-tuber.

NASA has released dramatic video footage of Phobos, one of Mars’ two moons, crossing the face of the sun.

But you’ll notice from the video above that Phobos looks more like a potato than the sphere shape typically associated with planets and moons.

The footage, taken by NASA’s Perseverance Mars rover on April 2, lasts a whopping 40 seconds, which NASA notes is much shorter than a typical solar eclipse involving Earth’s moon.

Of course, Phobos is also 157 times smaller than Earth’s moon, as well.

NASA has filmed Martian eclipses before, but experts say it’s the highest quality footage yet.

“I knew it was going to be good, but I didn’t expect it to be this amazing,” Rachel Howson of Malin Space Science Systems in San Diego, one of the team members who operates the camera, said in a press release from NASA’s Jet Propulsion Laboratory.

Sadly, the chances of capturing future Phobos eclipses are declining since the moon is getting closer to the Martian surface and is destined to crash into the planet.

On the bright side, scientists say that won’t happen for at least another 10 million years.

Page 1 of 1
Permissions in this forum:
You cannot reply to topics in this forum
Latest topics
» 19 elementary school children killed in mass shooting.

» Labour leader Keir Stammer can't answer the simple question of whether a woman has a penis or not...

» If you want a good laugh, watch this from a year ago..

» US Congress passes stimulus bill giving every American $600 and these little "extras".

» Woman Married Cat to Avoid Landlords From Evicting It

» I think I just created a family war scenario

» No of course they don't want to make us have RFID chips under the skin...

» Trump-supporting CEO says he has enough evidence of "election fraud" to imprison the overwhelming majority of Americans, including children