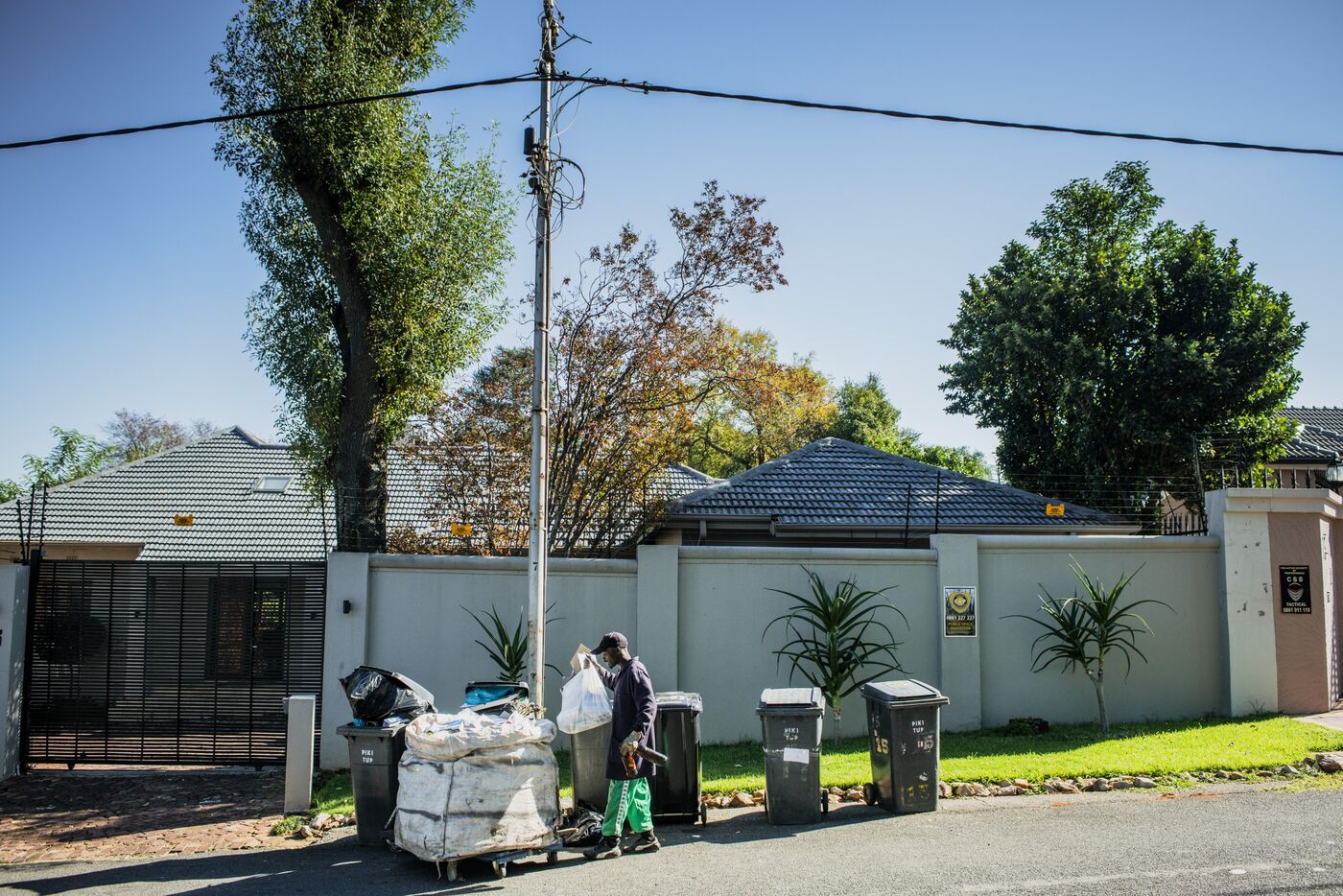 Luyanda Hlatshwayo wakes up at 4 a.m. in the abandoned inner-city school building with shattered windows he calls home. He stuffs a pair of worker’s gloves in his pocket and rides a warehouse trolley like a giant skateboard to a suburb of South Africa’s economic metropolis, Johannesburg: It’s garbage collection day.

The 35-year-old university dropout often makes the 8-kilometer trip on an empty stomach—he can only afford to eat twice a day. Time is precious because he must salvage as many recyclables as possible—tin cans, plastic bottles, cardboard boxes—before the city garbage trucks arrive.

“You gotta go early to beat the traffic,” Hlatshwayo said as he lifted up a pizza box to shake out crusts and cigarette butts. “What people don’t realize is that we’re subsidizing the city and its residents. If we don’t go to work, they’d be short on trucks to collect all the garbage.”

Hlatshwayo is one of an estimated 6,000 waste-pickers in Johannesburg who live off other people’s garbage in what the World Bank calls the most unequal country on earth. A legacy of apartheid, inequality remains so ingrained the ruling African National Congress hasn’t been able to narrow the wealth gap since taking power 25 years ago. It remains one of the biggest challenges President Cyril Ramaphosa, a multi-millionaire, faces as he prepares to start a fresh term after the ANC won the May 8 general elections.

“What the ANC seems to be putting on the table is a mixed economic approach: creating a more business-friendly environment and being more open to foreign investors, while the other part is that the state does intervene by giving assistance when needed,” said Collette Schulz-Herzenberg, a political scientist at Stellenbosch University. “But it’s had mixed results in that regard, and it’s really facing a big challenge.”

The rich always find a way to keep everyone else picking through the shit they don't want.
_________________
“If we extend unlimited tolerance even to those who are intolerant, if we are not prepared to defend a tolerant society against the onslaught of the intolerant, then the tolerant will be destroyed, and tolerance with them.”

» You have just been promoted to Newspaper Editor...

Today at 2:38 am by Original Quill

» A chilling quote about Tory philosophy

» Boy, 15, cried ‘help, help’ after being ‘lured to his death and ambushed by knife thugs’ in middle of the night

Yesterday at 6:29 pm by Tommy Monk

Yesterday at 4:17 pm by Original Quill

» A thought for discussion

Yesterday at 3:01 pm by Maddog

» The Black Dog that Coronavirus created

» As President, Trump achieved many "firsts"

» Man U v. Liverpool postponed due to virus