No One Could Help This Man On The Plane, Then A Teenager Walks Up And Grabs His Hands - Be Inspired

No One Could Help This Man On The Plane, Then A Teenager Walks Up And Grabs His Hands - Be Inspired

Lynette Scribner of Seaside, Oregon, was on a flight with a blind and deaf man. Many people tried to help the man but no one could communicate with him, which made it difficult to assist him.
Then a teenage girl walked up and grabbed his hands. 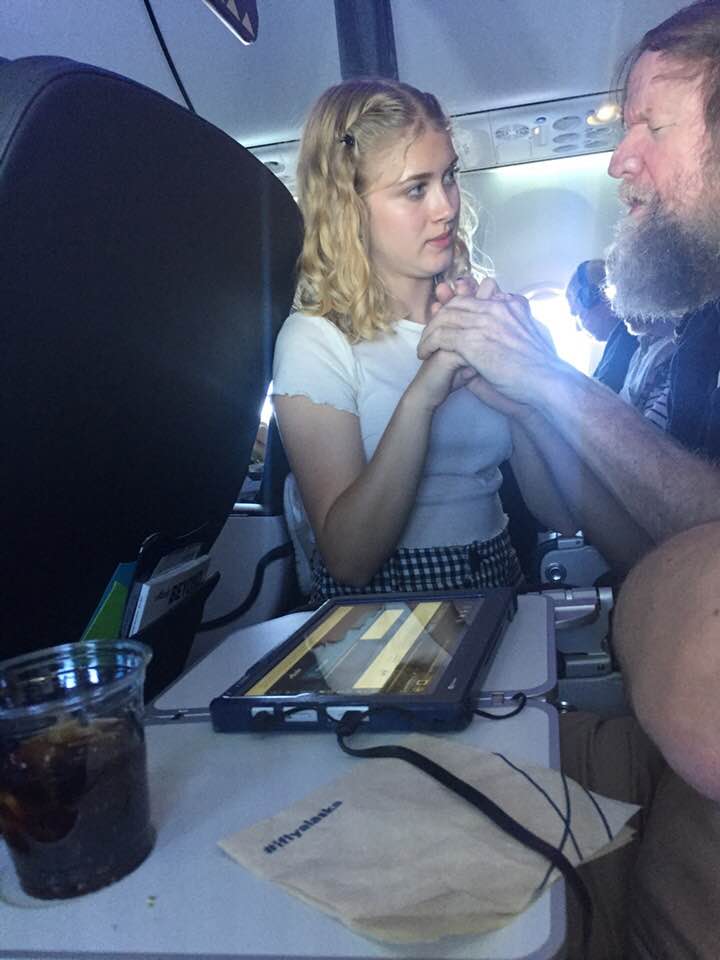 "I saw this gentleman, Tim, in Boston's Logan airport with the sister he'd been visiting.

It appeared he was both deaf and blind, as I observed her signing into his hand for him to feel her words.

When he came aboard the plane he had been assigned the middle seat of my row.

The kind gentleman who had the aisle seat graciously gave it up for him.

At this point Tim was traveling alone.

The flight attendants sincerely wanted to assist him, but had no way to communicate.

I watched as they didn't flinch when he reached out to touch their faces and arms.

They took his hand and tried so hard to communicate with him, to no avail.

The man who had given up his seat did his best to assist him with things like opening coffee creamer and putting it in his coffee.

When Tim made the attempt to stand up and feel his way to the restroom, his seat mate immediately was up to help him.
The flight attendants were talking among themselves and someone suggested paging to see if anyone on board knew sign language.

That's when this lovely young woman came into the picture.

15 years old, she learned ASL because she had dyslexia and it was the easiest foreign language for her to learn.

For the rest of the flight she attended to Tim and made sure his needs were met.

It was fascinating to watch as she signed one letter at a time into his hand.

He was able to 'read' her signing and they carried on an animated conversation.

When he asked her if she was pretty, she blushed and laughed as the seat mate, who had learned a few signs, communicated an enthusiastic yes to Tim.

All of us in the immediate rows were laughing and smiling and enjoying his obvious delight in having someone to talk to.
Huge kudos to the flight attendants of Alaska Airlines who went above and beyond to meet Tim's needs.

I can't say enough about this beautiful young woman named Clara who didn't think twice about helping her fellow passenger.

It was a beautiful reminder, in this time of too much awfulness, that there are still good, good people who are willing to look out for each other.

6/21/18 Addendum: This has come to the attention of Alaska Airlines and they are in touch with Clara's family, the facility where Tim lives, and the kind seat mate. I have been so touched by the response to this story. We are all starving for good news and this was just what we needed. Thanks all!"

Page 1 of 1
Permissions in this forum:
You cannot reply to topics in this forum
Latest topics
» Artist Paints Beautiful Portrait By Making Handprints With His Daughter

Yesterday at 9:54 pm by Didgee

Yesterday at 9:05 pm by Maddog

Yesterday at 6:33 pm by Vintage

Yesterday at 5:41 pm by Maddog

Yesterday at 5:20 pm by Maddog

Yesterday at 5:08 pm by Original Quill

Yesterday at 4:54 pm by Original Quill

Yesterday at 4:29 pm by Original Quill

Yesterday at 4:28 pm by Vintage

Yesterday at 4:12 pm by Original Quill

Yesterday at 3:56 pm by Original Quill

Yesterday at 11:41 am by inmyopinion

Yesterday at 1:19 am by JulesV