A high school student's prom pictures have generated a furious debate online after some social media users accused the 18-year-old of "cultural appropriation".

Twitter user Keziah, who is not Chinese, posted pictures of herself wearing a cheongsam, or qipao - a traditional Chinese dress - for her prom in Utah, USA, last week.

In a widely-shared response to the pictures, one Twitter user, Jeremy Lam, tweeted: "My culture is not your... prom dress".

The original tweet, and Lam's criticism on Friday night, have attracted hundreds of thousands of likes, tens of thousands of retweets, and thousands more comments as supporters and critics clashed over the weekend over the concept of cultural appropriation - the adoption of minority cultures, typically by dominant cultures. 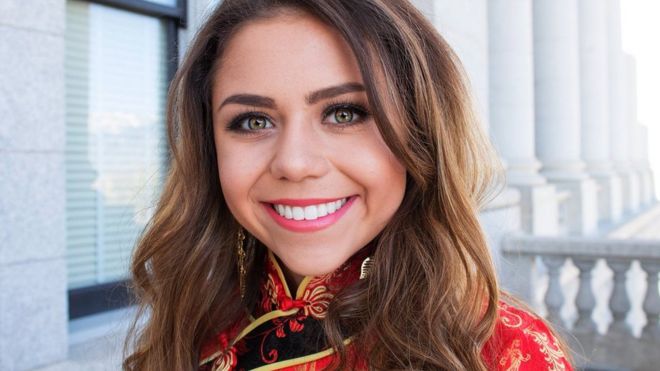 Fuck off with those pathetic "leftist" crap faux_labels...

What the fuck is supposedly so "leftist" about a bunch of snowflake millenials having an online barney about nothing in particular, anyways..

Bunch of spoilt brats with too much time, money and luxury on their hands, and too little real world awareness.
_________________
It's not what you look at that matters, it's what you see.
Our life is frittered away by details. Simplify, simplify.
The mass of men lead lives of quite desperation.
Henry David Thoreau

Fuck off with those pathetic "leftist" crap faux_labels...

What the fuck is supposedly so "leftist" about a bunch of snowflake millenials having an online barney about nothing in particular, anyways..

Bunch of spoilt brats with too much time, money and luxury on their hands, and too little real world awareness.

Because this sort of busllhit is being taught by left wing educators and brainwashing students in regards to cultural appropriation..Its even more stupid, because we are supposed to be multicultural. Thus laying claim to how and why some minorities hold sway over cultural aspects, is segregation and not multiculturalism

I dont see those same left wing idiots claim this, when its World hijab day

In July 1954, a 19-year-old Memphis truck driver recorded at Sun Studio the song “That’s All Right.” When a local disc jockey promised to play it, the truck driver tuned his parents’ radio to the station and went to a movie. His mother pulled him from the theater because the DJ was playing the record repeatedly and wanted to interview the singer immediately. The DJ asked where the singer had gone to high school. He answered, “Humes,” an all-white school. The DJ asked because many callers “who like your record think you must be colored, singing the way you do.” Elvis Presley from Tupelo, Miss., had committed “cultural appropriation.”

According to Ray Connolly in “Being Elvis,” Arthur “Big Boy” Crudup, a black Mississippian, had popularized “That’s All Right.” When Presley first entered the recording studio, he was asked, “Who do you sound like?” He replied, “I don’t sound like nobody.” Actually, he sounded like someone melding the sounds of gospel, country and what was then called “race music” — music by Southern blacks — to make something new.

The hysteria du jour, on campuses and elsewhere, against “appropriation” illustrates progressivism’s descent into authoritarianism leavened by philistinism. This “preening silliness” — the phrase is from the Federalist’s David Marcus — is by people oblivious to the fact that, as Marcus says, “culture blending is central to the development of, well, everything.”

Indignation about appropriation is a new frontier in the ever-expanding empire of cultivated victimhood: “Marginalized” persons from a particular culture supposedly are somehow wounded when “privileged” people — those who are unvictimized or less victimized — express or even just enjoy the culture of more pure victims without their permission.

The wearing of sombreros at tequila-themed parties triggered — to speak the language of the exquisitely sensitive — the anti-appropriation constabulary at Bowdoin College. Oberlin College’s palate police denounced as “appropriative” an allegedly inauthentic preparation of General Tso’s chicken. Such nonsense is harmless — until it morphs into attempts to regulate something serious, like writing fiction: Do not write about cultures other than your own.

With characteristic tartness, novelist Lionel Shriver responded to this “climate of scrutiny” when, at a writers’ conference, she clapped a sombrero on her head and said: We’re not supposed to try on other people’s hats? That’s what we’re paid to do. Instead, “any tradition, any experience, any costume, any way of doing and saying things, that is associated with a minority or disadvantaged group is ring-fenced: look-but-don’t-touch.”

Eugene Volokh, law professor and maestro of the Volokh Conspiracy blog, drolly says: If only there were a word for “telling people that they mustn’t do something because of their race or ethnic origin.” Asks Franklin Einspruch, writing in the Federalist, “Where does new culture come from? It is copied, with alterations, from existing culture. The process is reproductive. Sexy, even. So of course, the outrage-as-a-lifestyle wing of the progressive Left wants to dictate rules for its proper enjoyment.”

The Federalist’s Robert Tracinski says appropriation is actually learning through admiration, adding: “The left loudly promotes its flattering self-image as . . . more culturally open and advanced — more intellectual, artistic, and cosmopolitan,” but its “appropriation” tantrums reveal how its fixation with “racial identity and resentments ends up imposing the narrowest kinds of parochialism.”

The University of Pennsylvania’s Jonathan Zimmerman, writing in the Chronicle of Higher Education, says “the mostly left-wing quest for cultural purity bears an eerie echo to the right-wing fantasy of national purity, which peaked during the so-called 100-percent-American campaigns of the early 20th century.” Of Chuck Berry, Zimmerman writes: “His first big hit, ‘Maybellene,’ adapted an old melody that had been recorded by country-music performers like Bob Wills and His Texas Playboys. Berry combined the ‘hillbilly’ sound of white country with the African-American rhythm and blues that he imbibed in his native St. Louis.” For this, he was heckled in Harlem.

John Lennon said, “Before Elvis, there was nothing.” Not really: There was Crudup, and before him there was a long, creatively tangled line of precursors. Elvis, said Mick Jagger, was “an original in an area of imitators.” Actually, no cultural figure is entirely original.

Listening to Radio Luxembourg late one night, teenaged Keith Richards heard “Heartbreak Hotel,” and “when I woke up the next day I was a different guy.” Bob Dylan, a freewheeling cultural appropriator himself, said, “Hearing Elvis for the first time was like busting out of jail.” Those who would wall off cultures from “outsiders” are would-be wardens.

The world has gone mad.

I searched high and low for a Chinese style dress years ago, the ones on sale were normally in a very small size for very petite oriental women, in the end I managed to get on in a size 14.....I loved it and wore it a lot, without any ridiculous comments about me nicking someone else's cultural garb.
_________________
Not everyone likes me, but not everyone matters.