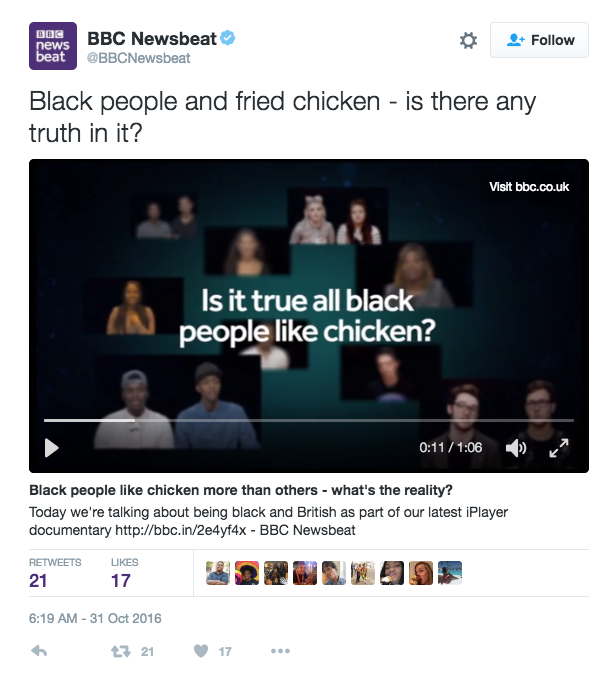 BBC’s Newsbeat has prompted a social media storm after it asked on Twitter: “Black people and fried chicken - is there any truth in it?”

The corporation’s news service aimed at teenagers received immediate condemnation after asking the question playing with a racial stereotype at the end of Black History Month.

The video features the response from young black and white to the question (”A lot of black girls that I know, they’re always like, ‘Yeah I eat loads of chicken because it makes your bum bigger’,” says one). But anger on Twitter seems to stem less from what they said and more that the BBC posed the question in the first place.

Had I studied psychology I may have the answer Eddie...but I don't know.
Does something happen in their life...or in their minds, when they are young?

And how can siblings that are brought up together in the same way turn out so differently?

Yes Syl, if you'd taken psychology up you may have been the one to crack it. We shall never know.
I think there must be an "evil gene" inside some people, surely?

I COULD SUGGEST that you two look up "Sociopath","Psychopath", and "Psychosis" to gain some idea of how scrambled/twisted/plain wrong brain chemistry to lead some individuals to perform quite evil, vile and simply wrong-headed deeds...

Page 2 of 2
Permissions in this forum:
You cannot reply to topics in this forum
Latest topics
» Happy belated second wedding anniversary, edds!