Zakia Belkhiri showed up to a rally being held by anti-Islam protesters, and she began taking selfies with those who had gathered. The BBC, Huffington Post, and many other sites praised Belkhiri for dealing with the protesters peacefully and for setting a positive example. A problem arose, however, when people went to Belkhiri’s social media pages and found viciously antisemitic comments. In this video, David Wood discusses Belkhiri’s posts and the double standards of the media.

Re: Zakia Belkhiri’s “Peace Selfies” (and Her Antisemitic Rants)

Last week it was revealed that a young Muslim woman who famously took a selfie in front of an anti-Islamist crowd had herself spouted antisemitic comments.

The BBC described it:

The photo of a young Muslim woman called Zakia Belkhiri subtly undermining an anti-Islam demonstration by using the protesters as a backdrop for a selfie was one of the most striking images of the past week. But it's a story with a not so pleasant postscript.

However, since then a series of deeply disturbing anti-Semitic statements made by Ms Belkhiri on social media have come to light.

In one tweet dating from November 2012, she wrote: "Hitler didn't kill all the Jews, he left some. So we know why he was killing them."

And in another Facebook post from March 2014, she used an expletive to describe Jews before adding: "I hate them so much." 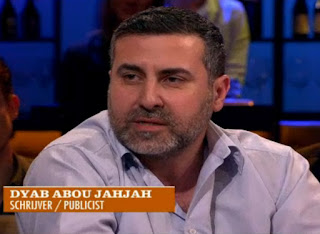 Flemish weekly magazine Knack published an article by Dyab Abou Jahjah defending Belkhiri, and he blames her antisemitism on - Israel. After saying that her antisemitic posts happened when she was "only eighteen," Abou-Jahjah then says that she cannot be blamed for conflating Zionists and Jews. After all, he asserts, Zionist Jews are like ISIS and Jews in general are like Muslims in general who consider Israel to be an evil, genocidal regime. He says that Belkhiri is a victim of Israeli propaganda because by calling itself the Jewish state it is just like the Islamists who call ISIL the Islamic State. How can you blame the poor innocent 18-year old for justifying genocide against millions of Jews???

Abou-Jahjah also proudly says "I always use the term 'Zionist' in my criticism and I avoid the word 'Jews', because I am aware of my position as an example to many, and therefore my responsibility to make people aware that it is not an ethnic or religious conflict."

How ethical! In fact, there is a great example of how Jahjah used the word "Zionists" instead of "Jews."

When the mayor of Antwerp, Bart De Wever, decided to call the assistance of the army after the terror attacks in Paris in order to protect the Antwerp Jewish schools, Jahjah called him "a Zionist sucker" ('zionisten-pijper') - essentially a "Zionist asslicker"  - for wanting to protect Jewish schoolchildren from being slaughtered. 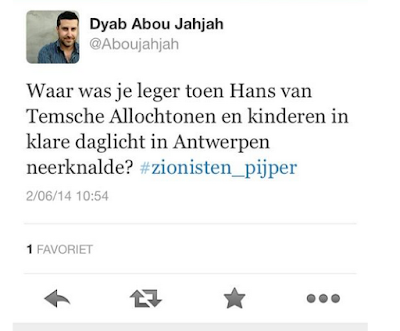 In an interview, he said that he realized that the term was offensive and he took down the tweet and changed it to "Zionist flunky."

Here's another example of how Abou Jahjah really thinks about Jews, even though he claims in the media to want to live in a binational state where Jews and Arabs are treated equally:

"La valise ou le cerceuil" means that the Jews should be removed from the region via "the suitcase or the pallbearers."

Abou Jahjah is an antisemite who thinks that mindlessly changing "Jews" to "Zionists" when he writes for Western media today is how to shield himself from quite warranted criticism that he simply hates Jews.


What I want to know is when are some of the lefties on here going to actually condemn this blatant antisemitism?

Page 1 of 1
Permissions in this forum:
You cannot reply to topics in this forum
Latest topics
» The good night and good morning thread

Today at 9:36 pm by Original Quill

Today at 9:30 pm by Original Quill