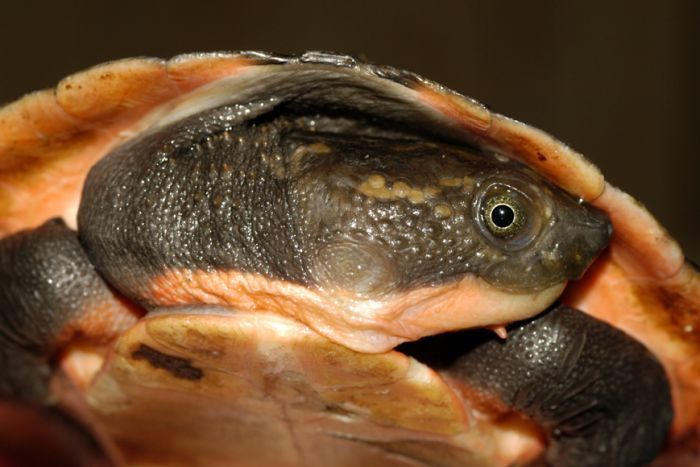 Photo: The turtle is distinguished by the bright salmon flushing of its shell and limbs in younger animals, a prominent head shield that extends down each side of the head to the ear, and some features of the shell and mouth

A new species of freshwater turtle has been discovered in Papua New Guinea, which researchers say would have been present while the island was still forming.

A study published in the international journal, Zootaxa, says the turtle, named Elseya Rhodini, is one of three distantly-related species found across PNG and Indonesia's Papua province.
The study's lead author, Arthur Georges from the University of Canberra, says the three species evolved from a common ancestor somewhere between 17 and 19 million years ago.
"That animal has seen the whole orogenesis [mountain creation] of New Guinea happen," he said.
"It's been there so long that it's seen the telescopic uplift of the mountain ranges and the accretion of some of those island arcs onto the northern edge of New Guinea.
"So it's actually seen the formation of New Guinea, which we find quite remarkable."
Mr Georges said the turtle's discovery was an important insight into the region's past.
"It's sort of the museum of Australasia, because Australia underwent progressive aridification and we lost a lot of species, and representatives of those are still present in the extremely biodiverse Papua New Guinea," he said.
"So it's really important for the region to document what's there."
The newly discovered turtle species is part of the Chelidae family of side-neck turtles which are restricted to South America and Australia, along with PNG, Timor and Rote in Indonesia.

Mr Georges said it took genetic testing to confirm it was a separate species.
He said it had been known to locals as a food source, but its habitat protected it from becoming endangered.
"It's actually really abundant," he said.
"It's found up in the small streams that run up into the forest, so it's not found in the swamps and the rivers where most of the people hunt.
"So, it's not as conspicuous as the other turtles." 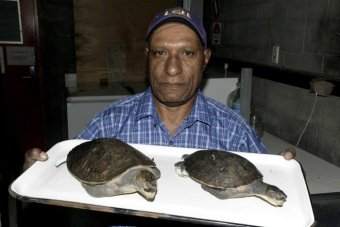 
Isn't the World amazing when we are still finding new creatures!

I watched a documentary about mermaids the other day.

Years ago the old Sailors thought the Manatee was a Mermaid. Specsavers wasn't around then!

eddie wrote:I watched a documentary about mermaids the other day.

Lots of marine biologists say they have evidence of them. I'll have to find some links

Do you mean this one?

Found a couple more I'm going to have a look at.

Lord Foul wrote:mermaid and spam anyone ?

and does the spam get fed to the mermaid?

Well, they are probably fed up with shrimps lol

There's a restaurant in London called "Bubba's shrimp" after the character in Forrest Gump.