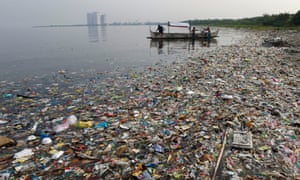 Scientists and volunteers who have spent the last month gathering data on how much plastic garbage is floating in the Pacific Ocean returned to San Francisco on Sunday and said most of the trash they found is in medium to large-sized pieces, as opposed to tiny ones.
Volunteer crews on 30 boats have been measuring the size and mapping the location of tons of plastic waste floating between the west coast and Hawaii that according to some estimates covers an area twice the size of Texas. 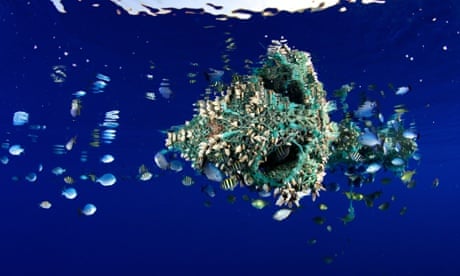 “It was a good illustration of why it is such an urgent thing to clean up, because if we don’t clean it up soon, then we’ll give the big plastic time to break into smaller and smaller pieces,” said Boyan Slat, who has developed a technology he says could start removing the garbage by 2020.
A 171ft mother ship carrying fishing nets, buckets, buoys and bottles, among other items, and two sailing boats with volunteers who helped collect the garbage samples arrived at San Francisco’s Piers 30-32. The boats went on a 30-day voyage as part of the “Mega Expedition”, a major step in an effort to clean up what is known as the Great Pacific Garbage Patch.
The expedition was sponsored by the Ocean Cleanup, an organisation founded by Slat, a 21-year-old innovator from the Netherlands.
Slat said the group would publish a report of its findings by mid-2016 and after that hoped to test out a one-mile barrier to collect garbage near Japan. The ultimate goal is the construction of a 60 mile (96.5km) barrier in the middle of the Pacific.

Slat said he became passionate about cleaning the oceans of plastic while diving in the Mediterranean sea five years ago.
“I was diving in Greece and realised that there were more plastic bags than fish,” he said, “and I wondered: why can’t we clean this up?”
After dropping out of university after six months, Slat dedicated his life to developing the technology the group will start testing next year. He has envisioned using long-distance floating barriers that will attach to the seabed and target swirling ocean currents full of waste to skim garbage from the surface while aquatic life and currents pass underneath.
After a 2012 Ted Talk about his idea was viewed more than 2m times, Slat decided to launch a Kickstarter campaign and raised $2.27m, helping to start his organisation. Soon, his innovative solution got the attention of major philanthropists in Europe and Silicon Valley, including Salesforce.com chief executive Marc Benioff, who are helping pay for the data-gathering efforts and the technology’s development.

The Pacific expedition, which will end in mid-September, will gather data more extensive than what has been collected in the past 40 years. It also will give a better estimate of the how much plastic waste is in the Pacific, Slat said.
The boaters are using GPS and a smartphone app to search for and record the plastic. They take samples and ship them to the Netherlands, where the plastics are counted and recorded.
The Great Pacific Garbage Patch was discovered by Charles Moore in 1997, as he returned home from the Transpacific Yacht Race.

We take such great care of the world!

A research expedition, sponsored by Ocean Cleanup, has returned on Sunday with devastating news. The Great Pacific Garbage Patch, floating between California and Hawaii, is much bigger than the scientists could imagine.

Using 30 boats, the team of scientists spent a month collecting samples and measuring the dimensions of the patch which they hope to clean up in the future. According to those findings, the cleanup effort could take much longer than previously anticipated, as the collection of discarded plastic waste is nightmarishly big.
The stretch of accumulated pollution is roughly twice the size of Texas.
"I've studied plastic in all the world's oceans, but never seen any area as polluted as the Great Pacific Garbage Patch," said Ocean Cleanup's lead oceanographer, Dr. Julia Reisser, according to Newser.
Ocean Cleanup's founder, Boyan Slat, has dedicated his life to finding ways to remove the plastic dumped into the sea. The 21-year-old says that it's essential to start cleaning soon, otherwise the big plastic will have time to break down into smaller and smaller pieces.
"Based on what we've seen out there, the only way to describe the Great Pacific Garbage Patch is a ticking time bomb," Slat said during a news conference.
The researches, however, haven't given up hope. Despite its massive size, most of the trash in the Great Pacific Garbage Patch, including a one-ton fishing net, has not broken down yet.
Current cleanup methods usually involve large nets which are swept across the water to collect garbage, but Slat finds this method inefficient. He is working on new technology to defuse the "bomb." Using floating barriers which are fixed to the seafloor, he believes the cleanup can be carried out in as little as 10 years.
"By using floating booms instead of nets, much larger areas will be covered," he explained. "Not using mesh means that even the smallest particles will be diverted and extracted."
Slat said the group will publish a report of its findings by mid-2016. Soon after he hopes to test one of the one mile-long trash barriers near Japan. The ultimate goal is the construction of a 62 mile barrier in the middle of the Pacific.

Page 1 of 1
Permissions in this forum:
You cannot reply to topics in this forum
Latest topics
» Why some American shop owners are turning away customers wearing face masks

Today at 4:06 pm by Original Quill

Today at 2:07 am by Original Quill

Yesterday at 10:47 pm by Original Quill

» 19 year old woman murdered in drive by shooting in Blackburn, 5 appear in court

Yesterday at 4:19 pm by Tommy Monk

Yesterday at 3:36 pm by Original Quill

» The epitome of stupidity..

Yesterday at 2:57 am by Maddog

» The Fate Of Uighur Muslims In China: From Re-education Camps To Forced Labor