"When There's an Unarmed Person Coming at Them with a Knife or Something, You Shoot Them in the Leg"
Advice from Vice-President Biden.

yep words of wisdom from a political never was.
PS..IF YOU SAY ANYTHING NEGATIVE ABOUT DONALD TRUMP 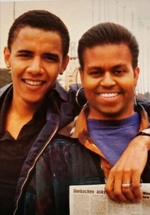 It's true that all famous people have long ladders in the game of 'chutes and ladders' to wealth.  Presidents have impressive retirement funds, and their opinions are sought after by publishers, institutions and big business.

But I don't think that's innate to Presidents.  We see it in Representatives, Senators, actors, sports figures, former NASA pilots, business leaders, and high-ranking military, to name a few.  The most you can say is that fame yields opportunity for money-making.

But Trump did more.  He has on-going businesses, and he refused to let go of them to trusts, as all other presidents have done.  The Hatch Act prohibits federal employees from engaging in most political activity inside federal buildings or while on duty. Though the president and vice president are exempt from the civil provisions of the Hatch Act, Trump's sons and daughter are effectively doing the same in his name.

For example, Trump has a hotel just down the street from the White House, and every country wanting favors from the US maintains suites in that hotel.  How many dignitaries maintain suites in Trump Towers, or Golf Clubs owned by Trump?

Page 2 of 2
Permissions in this forum:
You cannot reply to topics in this forum
Latest topics
» Jamaican criminal who won battle to avoid deportation from the UK after his release from jail is charged with a new murder eight months later