”For me he is not only PM of India but also emotion. You're king of social media. Don't go sir." 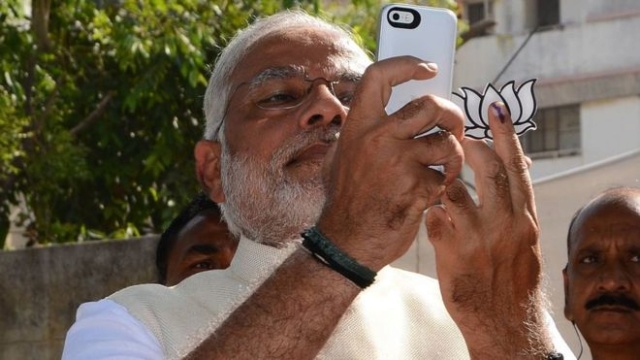 The world's second most popular leader - when it comes to social media, at least - sent shockwaves through the internet on Monday, after announcing he was considering leaving the platforms.
After all, Indian Prime Minister Narendra Modi is the only politician to even come close to challenging US President Donald Trump's online dominance.
And so it was somewhat unsurprising that the hashtag #ModiQuitsSocialMedia began trending in India, with users quick to share a heady cocktail of conspiracy theories, memes and desperate pleas.
However, Mr Modi, who has 54 million followers on Twitter, 35.2 million followers on picture sharing platform Instagram and 44 million followers on Facebook, soon revealed the true reason behind his abandonment of social media.
On Tuesday, he said that he would "give away my social media accounts to women whose life & work inspire us".
But the "big reveal" came only after his first tweet generated an absolute social media storm.
Some theories suggested he was quitting social media platforms as they were being controlled by his opponents. Others speculated that he would launch an indigenous social platform, to match Twitter and Facebook, something similar to social media platforms like WeChat and Weibo in China.
"Expect SM companies stock to crash," wrote one confident user.
Apart from the theories, there were desperate pleas from his fans. One wrote: "Please Sir, You can't leave social media now for the sake of your fans!" Another added: "Modi Ji if you leave social media , they will use it against you and nation interest."

“For me he is not only PM of India but also emotion. You're king of social media. Don't go sir."
Some users suggested that his account had been hacked.
Soon, #Iwillalsoleavetwitter started trending.
Arun Yadav, the head of Haryana state IT and social media for BJP, tweeted asking the PM to not quit the platform as it was one way Indians could communicate with him.

Page 1 of 1
Permissions in this forum:
You cannot reply to topics in this forum
Latest topics
» biden running for senate or president??

» The North South divide in the uK.

Today at 0:12 by Original Quill

Yesterday at 17:01 by Original Quill

Yesterday at 16:56 by Original Quill

» What do you see first?

» personal choices and liberties being eroded.

» If you no longer live in a country, should you lose the right to vote?

» France: Charlie Hebdo cartoons projected on government building to express solidarity with deceased teacher who was beheaded by Islamic terrorist