Nobody Left In Nation After Trump Orders All Immigrants, Descendants Of Immigrants Deported

Nobody Left In Nation After Trump Orders All Immigrants, Descendants Of Immigrants Deported

U.S.—After Trump issued an executive order instructing federal agents to deport all immigrants and descendants of immigrants, the nation turned into to a vast, empty landscape with absolutely nobody in it, sources confirmed Monday.

After the order was given, immigration enforcement agents went from house to house throwing out anyone whose family history could be traced to another country. Without exception, every person in the nation was found to be in violation of the new immigration policy.

Nobody was left, from children of recent immigrants and those whose ancestors came from Europe in the 18th century to Native Americans, whose ancestors arrived thousands of years before that. Vast cities sat dark and abandoned. The wind whistled through the country's plains and rural areas, tractors and other farming equipment standing silent. The American bison announced it would be making a comeback, taking back the country, but it also was found to have come from Asia and so the whole species was deported as well.

"This should take care of all the riffraff," said Trump in a broadcast that went to the few remaining holdouts who hadn't left the country yet. "We're making America great again by getting rid of everybody."

Finally, after everyone else had left in an orderly fashion, ICE agents arrived at the Oval Office to drag Trump himself out and have him deported back to Germany, where his family originated. Then they deported themselves.

Don't forget Melania and the kid.  She's a foreigner, and the kid has got alien parents. 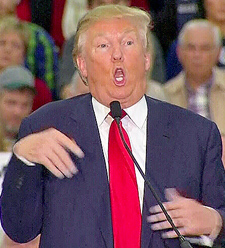