Wolfie, Brent Council in London are planting a seven mile long "corridor"  of wild flowers to encourage Bee's and other insects !

Wolf! You know about these? They’re beautiful!

Not all bees are yellow and brown. This is a northern blue banded bee. 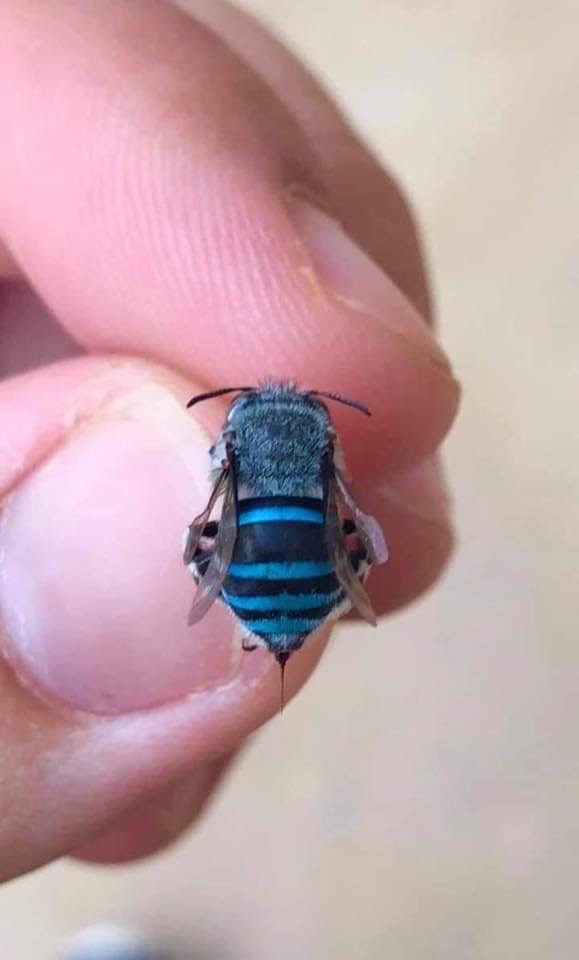 I actually have a question for Wolf about bees...is it all over the world there bees are becoming endangere, or just certain countries, like the UK for example?

While honeybees are under a range of threats across the world, the nature and extent of those threats varies from region to region --  rather than on a country-by-country basis.

In Britain and Europe you have continuing habitat loss (including a loss of forage in those areas taken over by either 'monocultural' and factory farming, or increasing 'urbanisation'), greatly exacerbated by excessive pesticide pollution (not only the Bayer-Monsanto nicotinoids, but they are the #1 culprits..), and a couple of bad parasitic diseases (Acarine, and Varroa..).

Pretty much the same problems in intensively cropped parts of Russia;  and some parts of Africa, Asia and North America --  bee populations can be suffering in over-farmed and heavily polluted regions, but can still be found thriving in other places..

Here in Australia, and over in much of Brazil and Argentina, loss of habitat and access to forage plants is usually more of a problem than pesticide poisoning, along with seasonal problems like fires, droughts and flooding, and increasing impacts from climate change..

Along with frogs and butterflies, bees are "early indicator organisms"  --  once you see these animals disappearing from your localities, you know that the environment is already heavily compromised ---  and well overdue for remedial work to have been started...
_________________
It's not what you look at that matters, it's what you see.
Our life is frittered away by details. Simplify, simplify.
The mass of men lead lives of quite desperation.
Henry David Thoreau

eddie wrote:Wolf! You know about these? They’re beautiful!

Not all bees are yellow and brown. This is a northern blue banded bee.

Besides the commonly recognised honeybee species (European, African, Indian, and Asiatic groups) , there are hundreds of 'native' bees out there...

Down here in Oz alone, we have hundreds of species and varieties of natives, largely from, but not only, two main genus :

Common native bees that I've seen around here include :

* The Trigona genus described in that article above;

*  The "Teddy Bear" carpenter bees --  https://www.aussiebee.com.au/teddy_bear_bee.html
--  while many people around here refer to these as "Bumble bees", they are a completely seperate genus to the British and Euro' species (Bombus genus ==  https://en.wikipedia.org/wiki/List_of_bumblebee_species ).

European honeybees, and some of the true bumble bees, are introduced species into Australia and New Zealand, but are so well established by now that many people won't recognise the difference.
_________________
It's not what you look at that matters, it's what you see.
Our life is frittered away by details. Simplify, simplify.
The mass of men lead lives of quite desperation.
Henry David Thoreau

Page 1 of 1
Permissions in this forum:
You cannot reply to topics in this forum
Latest topics
» Why guest posts must not be allowed.

Today at 4:15 pm by Original Quill

Yesterday at 5:50 pm by Maddog

Yesterday at 5:47 pm by Maddog