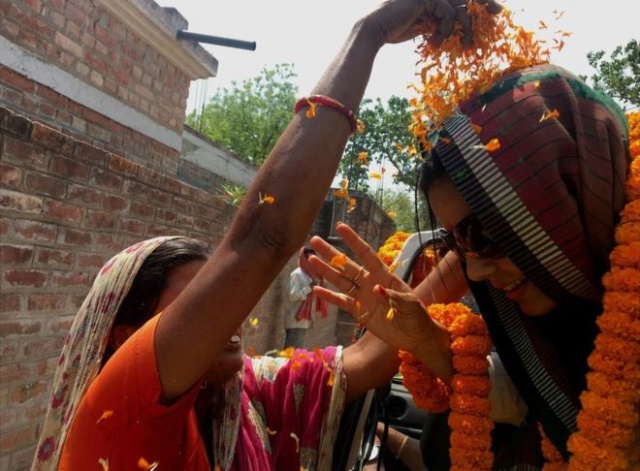 Women make up nearly half of India's 900 million voters, but they are still poorly represented in the country's law-making bodies. One political party is trying to correct the balance by nominating 41% female candidates.

The BBC's Geeta Pandey travelled to the state of West Bengal to see how they are faring.
On a bright sunny morning, as an open jeep decorated with bright yellow and orange flowers hurtles along the dirt track from one village to the next, women in colourful saris and men rush to greet Mahua Moitra.
They shower bright orange marigold petals on her, place garlands around her neck and many reach out to shake and kiss her hands. She waves at them, greeting them with her palms joined: "Give me your blessings."
Young men and women whip out their smartphones to take photos and selfies. On the way, she's offered coconut water and sweets.
Ms Moitra, who is contesting the general election as a candidate of the state's governing Trinamool Congress Party (TMC), is campaigning in her constituency Krishnanagar.

In India, only 11% of members of parliament are women, and in state assemblies it's 9%. In a list of 193 countries this year, India was ranked 149th for female representation in parliament - below Pakistan, Bangladesh and Afghanistan.
A bill to reserve 33% of seats for women in parliament and regional assemblies has been pending since 1996, so the decision by the TMC - led by West Bengal Chief Minister Mamata Banerjee - to give 41% of her party nominations to women has created a huge buzz.

Why shouldn't their state eventually have either a female Premier or governor, or extra female representation to the national parliament  ???

And they likely will again one day -- even if that day is a long way off.

"What goes around, comes around.."
_________________
It's not what you look at that matters, it's what you see.
Our life is frittered away by details. Simplify, simplify.
The mass of men lead lives of quite desperation.
Henry David Thoreau

Yes, it's possible - if females of the right calibre emerge. India elected a female Prime minister long before we did, here in the UK.

But it wouldn't be right for females to be elected just for appearances sake, or just to even out the current gender inequalities. Being of the right calibre is the crucial requirement for a role as important as leading a country.
_________________
Live Love Laugh

Yesterday at 9:59 pm by Original Quill

Yesterday at 6:09 pm by Victorismyhero