Today marks the 52nd anniversary of the #AberfanDisaster.
Our thoughts are with all those affected by this tragedy xx. 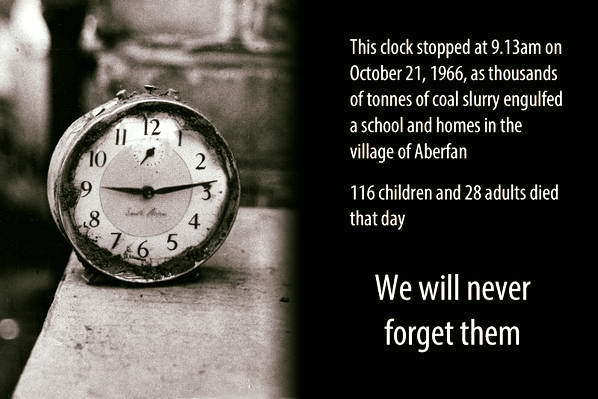 At 9.15 am on Friday, October 21, 1966 a waste tip slid down a mountainside into the mining village of Aberfan, near Merthyr Tydfil in South Wales.

It first destroyed a farm cottage in its path, killing all the occupants.

At Pantglas Junior School, just below, the children had just returned to their classes after singing All Things Bright and Beautiful at their assembly.

It was sunny on the mountain but foggy in the village, with visibility about 50 yards. The tipping gang up the mountain had seen the slide start, but could not raise the alarm because their telephone cable had been repeatedly stolen.

(The Tribunal of Inquiry later established that the disaster happened so quickly that a telephone warning would not have saved lives.)

Down in the village, nobody saw anything, but everybody heard the noise.

The slide engulfed the school and about 20 houses in the village before coming to rest. Then there was total silence..

144 people died in the Aberfan disaster: 116 of them were school children. About half of the children at Pantglas Junior School, and five of their teachers, were killed..

I remember the horror of Aberfan, I dont think anyone who was old enough to remember it will ever forget it.

We spend a lot of time in Wales, and even now we see lots of houses built at rhe base of huge slag heaps.
They look like a disaster waiting to happen.

I was born and bred in a mining village in South Yorkshire, and well remember just how deeply this disaster affected my family and friends there.

I was a kid and remember my mum crying over the children. It something I won't forget.

The horror, the horror.