Venus may once have been habitable, Nasa says

Venus may once have been habitable, Nasa says

Being too close to the sun caused its oceans to evaporate, leading to a build-up of carbon dioxide that produced runaway global warming and today's temperatures of more than 460C 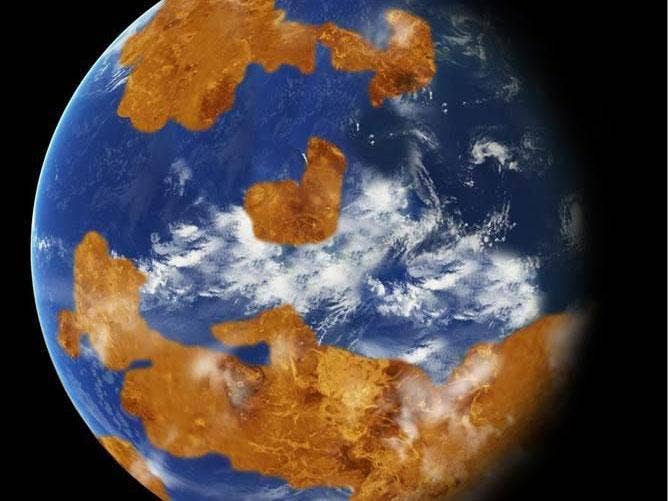 Venus – a hellish planet with an atmosphere of carbon dioxide, almost no water and temperatures of more than 460 degrees Celsius – may once have been habitable, according to Nasa scientists.

Researchers used climate models to calculate that Venus might have had a shallow ocean of liquid water and temperatures that could have allowed life to exist for up to two billion years of its early history.

The atmosphere is 90 times as thick as the air on Earth and scientists had thought this was largely caused by the difference between the two planets’ rate of spin. A day on Venus lasts 117 Earth days because it spins on its axis at a much slower rate.

But recent research showed that Venus could have had an atmosphere similar to the Earth’s today.


The first signs that Venus once had an ocean were discovered by NASA’s Pioneer mission in the 1980s.
Venus is closer to the sun than Earth and receives far more sunlight. This caused the ocean to evaporate, water-vapour molecules were broken apart into hydrogen and oxygen by ultraviolet radiation and the hydrogen escaped to space.

With no water left on the surface, carbon dioxide built up in the atmosphere and led to a runaway greenhouse gas effect that created present searing heat.

Michael Way, a researcher at Nasa's Goddard Institute for Space Studies (GISS) in New York, said: “Many of the same tools we use to model climate change on Earth can be adapted to study climates on other planets, both past and present.

“These results show ancient Venus may have been a very different place than it is today.”
Colleague Anthony Del Genio added: “In the GISS model’s simulation, Venus’ slow spin exposes its dayside to the sun for almost two months at a time.

“This warms the surface and produces rain that creates a thick layer of clouds, which acts like an umbrella to shield the surface from much of the solar heating.

“The result is mean climate temperatures that are actually a few degrees cooler than Earth's today.”

In a statement, Nasa said it was thought that Venus may have had more land than Earth.

“This type of surface appears ideal for making a planet habitable. There seems to have been enough water to support abundant life, with sufficient land to reduce the planet's sensitivity to changes from incoming sunlight,” it added.

One of the factors they had to take into consideration was the ancient sun was up to 30 per cent dimmer.

“Even so, ancient Venus still received about 40 per cent more sunlight than Earth does today,” the statement said.
A paper about the research was published in the journal Geophysical Research Letters.

So, are we going to end up going the same way?

Today at 7:49 am by Original Quill

Yesterday at 4:33 pm by Original Quill

Yesterday at 1:25 pm by Original Quill