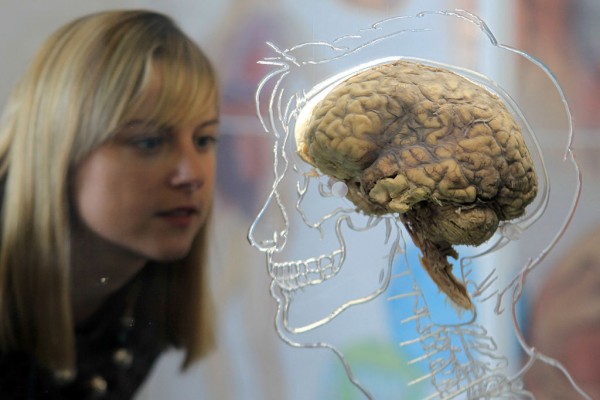 BRISTOL, UNITED KINGDOM - MARCH 10: Kerrie Grist looks at a real human brain being displayed as part of new exhibition at the @Bristol attraction on March 8, 2011 in Bristol, England. The Real Brain exhibit - which comes with full consent from a anonymous donor and needed full consent from the Human Tissue Authority - is suspended in a large tank engraved with a full scale skeleton on one side and a diagram of the central nervous system on the other and is a key feature of the All
US Biotech company, Bioquark Inc., has just earned an approval to conduct groundbreaking experiment in human brain.
Along with a team of neuroscientists from India's Revita Life Sciences, they will test the brains of clinically dead people to learn if the nervous system can be regenerated - in other words, be brought back to life.

The scientists will use stem cells injection, therapies and nerve stimulating procedures in patients at coma stage. 20 patients are identified as clinically dead by the hospital.

They live through live support and these scientists will monitor the progress to see if there is any sign of cell regeneration. Mainly, monitoring the spinal cord where it controls breathing and heartbeat.

The experiment will be conducted in Anupam Hospital, Uttarakhand India, as published in PR Web. The proof of concept purpose is mainly to learn more about brain stem death, in which a person loses consciousness and is no longer able to breathe without live support. However, scientists do not limit the possibility to a fully recovered patient, although it would take a long term research to find out. The trial is part of the bridge that eventually leads there.

Dr. Dean Burnett of Cardiff University says that similar test has actually been done in the previous years. However, neuroscientists find that brain is irreparable and how they assume it is fixable through reversal process - seems to be far from result.

Bioquark president Sergei Paylian explains that this experiment gives a new insight of human brain death. It will be benefit for future treatments and therapies especially for patients in coma.
According to Edgadget, researchers compare human's body with some animals that can re-grow their body parts. Hence, they hope of the same thing through the test - to erase history and restarting life.

If this Lazarus trial succeeds somehow, this will be the biggest revival process in history.
http://www.universityherald.com/articles/29777/20160505/biotech-lazarus-trial-brain-reversal-to-bring-dead-people-back-to-life.htm#!

What do you think?
Mary Shelley's Frankenstein's Novel come to life or the benefits from all of this could far out weigh the concerns and religious naysayers rants about 'playing GOD'...

Ive thought about this since reading Stephen King's novel (can't recall the name) when the father bought his child back to life.

Ive thought about this since reading Stephen King's novel (can't recall the name) when the father bought his child back to life. Well, not exactly like that, because the bodies that this study is lined up for is dealing with brain stem injuries - viable humans in coma's type of situations; where their bodies haven't been buried but kept alive via mechanical means because there's signs of life but perhaps brain damage.

The off-set could be a greater improved knowledge for treatment for Alzheimer's and what treatments aide in the repairment for epilepsy in children.

Yeah that's the book. I know it wouldn't really be like that but it really creeps me out tbh.
It just doesn't seem right. It's just odd.

you know what eddie...thats EXACTLY what the caveman shaman said when the guy in the next cave invented the wheel....

Lord Foul wrote:you know what eddie...thats EXACTLY what the caveman shaman said when the guy in the next cave invented the wheel....

Yesterday at 11:17 pm by Original Quill

Yesterday at 11:03 pm by Original Quill

Yesterday at 5:01 pm by Original Quill

Yesterday at 3:52 pm by Original Quill

Yesterday at 12:26 pm by Victorismyhero