The political actor created a play about a U.S. student killed by an Israeli soldier, which he said was "censored" 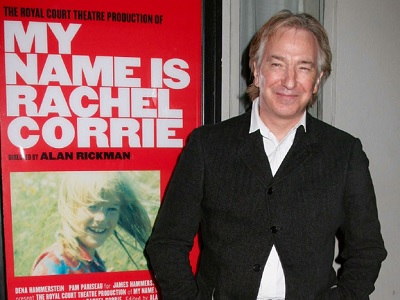 British actor Alan Rickman died Thursday at age 69, after a battle with cancer. Although perhaps most known for playing the melancholy Professor Snape in the “Harry Potter” movies, Rickman had not only a legendary film and theater résumé, but also a firm commitment to progressive politics, and support for Palestinian rights in particular.
Rickman edited and directed a play in 2005 titled “My Name Is Rachel Corrie,” based on the life of a 23-year-old American activist who was killed by an Israeli soldier.
Rachel Corrie, a student at Evergreen State College in Olympia, Washington, traveled to the occupied Gaza Strip as part of the pro-Palestinian International Solidarity Movement in 2003. At a nonviolent protest against Israel’s illegal demolition of Palestinian houses on March 16 of that year, an Israeli soldier ran over Corrie with a bulldozer, killing her.
“My Name Is Rachel Corrie” was based on the young woman’s diary and emails. Rickman co-edited it with Katharine Viner, editor-in-chief of leading British newspaper The Guardian.
In an article published in the Guardian on the day of Rickman’s passing, Viner reflected on her collaboration with the late actor. “Alan had recognised that Rachel’s voice could work brilliantly on stage, and I was commissioned to help him turn her words into a play,” Viner wrote.
“The play we edited together, ‘My Name is Rachel Corrie,’ had a greater impact than we ever imagined, with two runs at the Royal Court, a West End transfer and productions around the world, from New York to Haifa,” Viner continued. “And on the opening night we each admitted that we couldn’t have done justice to Rachel’s words without the other.”
When theaters tried to produce the play in the U.S., however, they faced powerful backlash. An Off Broadway production of the play was being considered at the New York Theater Workshop, but was delayed after opposition and pressure from pro-Israel groups.
Rickman vociferously condemned the delay of the production, which he called a form of “censorship.” “Calling this production ‘postponed’ does not disguise the fact that it has been cancelled,” Rickman said. “This is censorship born out of fear, and the New York Theatre Workshop, the Royal Court, New York audiences — all of us are the losers.”
Overall, “My Name is Rachel Corrie” was very well received, despite the adverse reaction from pro-Israel groups. “I never imagined that the play would create such acute controversy,” Rickman told leading Israeli newspaper Haaretz in a 2007 interview. “Many Jews supported it. The New York producer was Jewish and we held a discussion after every performance.”
“Both Israelis and Palestinians participated in the discussions and there was no shouting in the theater,” he added. “People simply listened to each other.”
Still today, Corrie’s story lives on. She is seen as an important symbol around the world in the Palestinian solidarity movement.
In March 2015, Palestinians honored Corrie’s memory by hanging photos of the slain American activist on newly planted trees, along with pictures of fellow activists in the International Solidarity Movement who were killed or injured by Israel’s military. Israeli occupation forces responded to the peaceful vigil with violence, shooting bullets at Palestinians and tear gassing them, before uprooting the trees.

After more than a decade, the U.S. government has done virtually nothing to punish Israel for killing its citizen.
Corrie’s family sued the Israeli government for a symbolic $1. Their case crawled through Israel’s courts for years, until, in February 2015, the Israeli Supreme Court threw the case out, denying any liability.
Ultimately, they said they were “disappointed but not surprised.” “We had hoped for a different outcome,” Corrie’s family remarked, “though we have come to see through this experience how deeply all of Israel’s institutions are implicated in the impunity enjoyed by the Israeli military.”
Fellow pro-Palestinian activists present at the time of the young woman’s killing in March 2003 say Israeli occupation forces deliberately crushed Corrie with the bulldozer. The Israeli government, on the other hand, insists it was an accident.
An investigation by the Israeli military absolved the soldier of all responsibility for killing Corrie, instead blaming the young women and fellow activists for “illegal, irresponsible and dangerous” behavior.
The Israeli soldier operating the bulldozer claimed he did not see Corrie. Amnesty International did not buy this argument, making it clear that “she was wearing a fluorescent orange vest when she was killed,” adding that Corrie “and other non-violent activists had been peacefully demonstrating against the demolitions for hours when the Israeli military bulldozer ran over her.”

Amnesty “condemned” the Israeli court’s verdict, saying it “continues the pattern of impunity for Israeli military violations against civilians and human rights defenders in the Occupied Palestinian Territories” and “shields Israeli military personnel from accountability and ignores deep flaws in the Israeli military’s internal investigation of Corrie’s death.”
“Israel’s military investigations have lacked independence, impartiality, transparency, appropriate expertise and sufficient investigatory powers,” Amnesty added, noting that the Israeli court “ignored substantial evidence.”
In the wake of Corrie’s killing, even Israel’s closest ally criticized it. Then U.S. Ambassador to Israel Dan Shapiro told the Corrie family that the Israeli investigation was not thorough, credible or transparent.
While the U.S. may have criticized Israel, however, it did not punish it. Today, the U.S. continues to give more than $3 billion per year in military aid to Israel, and the Obama administration considered increasing this figure to $5 billion.
Rickman brought the world’s attention to Corrie’s story.
“Alan was deeply committed to politics – a compassionate Labour man to his core,” Viner recalled in her article, referring to the largest left-wing party in the U.K.
When reflecting on his life and career, then, Rickman would doubtless have wanted his political work to be highlighted.

Today at 3:33 am by Original Quill