It's one small piece of evidence, but the amazing images have allowed extraterrestrial hunters to make a giant leap 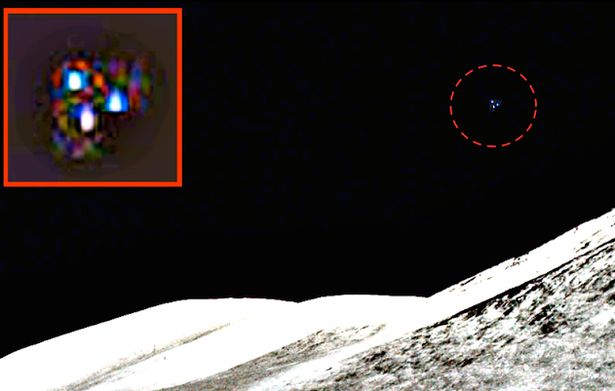 Spaced out: This snap was taken during the Apollo 17 mission
Earlier this week, the world was astonished when NASA released incredible new pictures of the Apollo moon missions.
But no-one was more excited than the UFO spotters of the internet, who have now claimed the images contain "mind-blowing" evidence of extraterrestrial life. 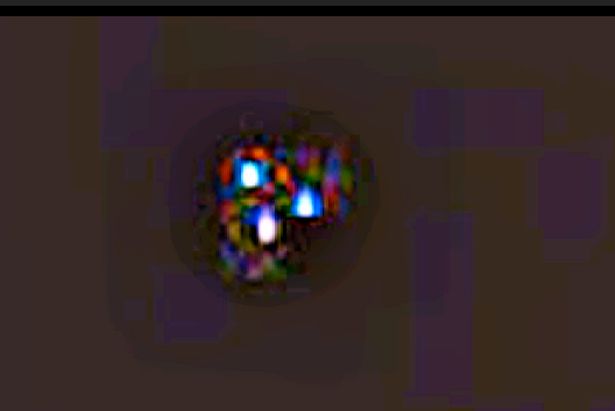 High tech: Is this really a 'TR3B craft' with three glowing engines?
The prominent alien hunter Scott C. Waring said there were no less than three separate UFOs in the Apollo pics.

He claimed the Apollo 17 mission was accompanied to the moon by a craft which was "alien technology at its finest".

Waring also identifed a "UFO with dangling arms looking towards the Apollo lander", which can be seen in the pictures below. 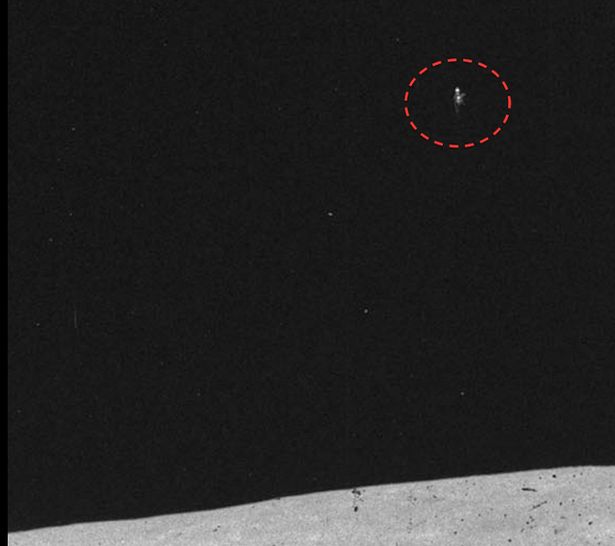 Mysterious and metallic: Can you see what it is yet?
"The UFO looks metallic and even seems to have a window facing the Apollo team," he added.
"Absolutely amazing find and I just don't see why NASA doesn't just cave in from the massive amount of evidence that the public is posting." 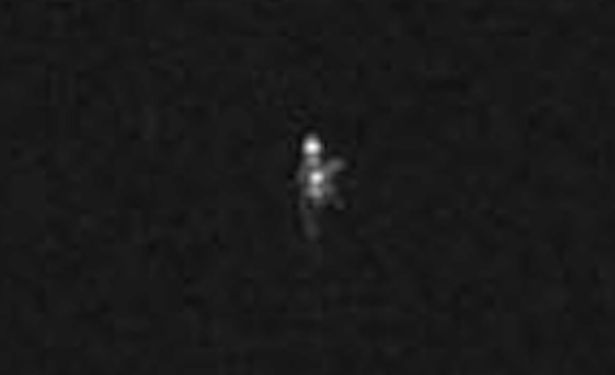 Apollo or a no-no? Is this really an alien flying machine?
The UFO spotter also highlighted the usual array of pyramids and alien faces on the lunar surface.


These astonishing claims caused confusion among conspiracy theorists who generally regard the moon landings as a hoax.
"Did we land on the moon or not?" wrote one bewildered commenter on a UFO blog.
"I get so confused because there are so many videos on Youtube claiming we did and some claiming we didn't.
"I feel both sides make valid points."

It's The Twilight Zone!

Of all the billions of stars in the whole frigging universe, why would it be so hard for anyone to think there are other life forms out there?

"The fault dear Brutus, lies not in the stars but in ourselves..."

If there was such a thing as aliens flying about don't you think after all these years they would have landed and made "themselves known" it's all bollocks anyway.

nicko wrote:If there was such a thing as aliens flying about don't you think after all these years they would have landed and made "themselves known"     it's all bollocks anyway.

Nicko you really think there is just "us"?


Perhaps the aliens already walk among us and we dont even know.
Perhaps there is no such thing as "space"
Perhaps the world, according to lots of scientists, really is flat.

If I may, here's what I presented to various Profs recently:

LIFE, THE UNIVERSE & EVERYTHING
There is a lot of speculation these days as to whether there are other life-forms out there in the Universe. There are millions of stars which surely means there are billions of planets. Do you honestly believe that this ball of rock we live on, is the only planet in the Universe that hosts life? It just does not seem logical to my mind.
Being a country boy, born and bred, and observing and understanding how nature works, I cannot help but believe that this planet we live on is not the only one to host life, however it may be defined. Wherever we go, wherever we look around our world, there is life. 30 Millions of species that have adapted to just about every environment, hostile and benign. From Antarctic ice fish to plants and creatures living in hot, arid deserts. From the bottom of the oceans around smokers, to Eagles over mountain tops. Migrating birds flying from one environment and food resource to another. From gnats to high flying birds, from mice to elephants, from a blade of grass to Giant Redwoods, in black caves that have never seen the light of day. Every corner of the planet has life of one form or another. Even we humans vary from continent to continent. Adaptation and subsequent change surely encourages life on other planets. Life adapting to whatever environment in which it is spawned.
Nature will not be outdone, considering which, I see viruses as an attempt by nature to redress the balance, a balance being upset by we humans.
Dear old Mother Nature, working in her kitchen, doesn’t make just one pudding, but a whole array of treats. From planet to planet, she will have done her best to spawn life. The chaos of the big-bang eventually settled down to order and some semblance of stability, allowing life to come into existence, and some eons in the future that order, our known universe, may suffer a big-crunch. But I believe that the chaos and  debris of that crunch must eventually come together, to form yet another universe.
I believe I’m right in saying you can’t have a positive without a negative, and visa-versa We cannot quantify anything unless we have experienced an opposite effect. How can we appraise sweet food if we’ve never had sour, how can we appreciate a warm summers day if we’ve never experienced freezing weather. Thus, and to simplify it, out of chaos comes order, out of order comes chaos, a never ending cycle, big-bang, big-crunch, big-bang, ad-infinitum. During the orderly calm periods, life will begin again, a momentous number of life-forms, adapting to all manner of environments, changing, evolving. Our human species may be alone, who knows, but life, in one way or another, in one form or another, must be out there, waiting to be discovered.
_________________
Theodosius Dobzhansky: 'Nothing in biology makes sense except in the light of evolution.'

Thanks Eddie. I had only one Prof disagree with the positive-negative effect. He believes they are one and the same thing and can't be seperated to act independantly in their own right. Otherwise, the response was a good...positive  lol...one.
_________________
Theodosius Dobzhansky: 'Nothing in biology makes sense except in the light of evolution.'

stardesk wrote:Thanks Eddie. I had only one Prof disagree with the positive-negative effect. He believes they are one and the same thing and can't be seperated to act independantly in their own right. Otherwise, the response was a good...positive  lol...one.

And I bet they're all vegetarian


but we will just have to "adapt"


but we will just have to "adapt"

Oh Victor you are a grumpo but I do likes ya

ave a butchers at the joke section...theres a couple there you may enjoy.......

Saw them! Don't always comment but I always chuckle

And I bet they're all vegetarian

Or they will be sentient Fungus Today at 12:02 am by Victorismyhero