what is it
where is it

does it have one center

does it have many centres

like for example a sheet of cling film being pulled along its x,y,z axises

pretty sure this is wrong and misleading

That's what I always thought, but then, the topic is very confusing for me -- especially as it would seem that the theory of gravitons and gravitational waves conflicts with the theory of space-time curvature as the cause of gravity. Then again, I might just be refusing to see them as both simultaneously true, as a few big brains discuss over here: http://physics.stackexchange.com/questions/427/nature-of-gravity-gravitons-curvature-of-space-time-or-both
_________________
"Got 16 days / got a bottle and a rosary

the problem is that space is not 2d and the picture shows distortion due to the objects mass (like a ball on a sheet ) but the force on spase is omnidirectional, like gravity which is a force of attraction
so space would be pulled towards it from every direction so instead of a picture showing the mass at the bottom of the well what it shoud show is the mass at the top of a dome created as space is pulled towards the mass 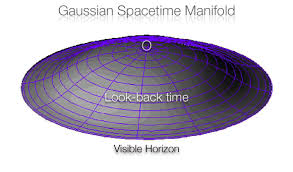 kind of like this mannifold but in all direction

for example if you took a block of gelatin with a inflated balloon at its center then sucked out the air of that balloon.(simulating a gravitational force )
The surounding gelatin (space) would be pulled/streched  towards the centre of the void from every direction

Well, one problem is that the representation is two-dimensional.  But the bending of space/time thesis is questioned these days, my brother tells me.  (He is a physicist at Los Alamos.)

Einstein's distortion of space/time only begs the question for me.  The question I've always had is, what is the interaction (or dimension) that causes it?  If mass bends space/time, why...or how?
_________________
“Little thieves are hanged, but great thieves are praised.” — Old Russian proverb, offered by Vlad Putin to Donald Trump, Helsinki, July, 2018.

Gravity is a myth.

That is my theory.
_________________
I have never met a caring sharing and compassionate Tory.
Tories and far right wingers. All liars and only it it for themselves.

Handy Andy wrote:Gravity is a myth.

That is my theory.

Gotta love how the ISS had all the heating, oxygen and gravity-independent toilets for Sandy to float around like that

Ben_Reilly wrote:Gotta love how the ISS had all the heating, oxygen and gravity-independent toilets for Sandy to float around like that

Today at 6:33 pm by Original Quill