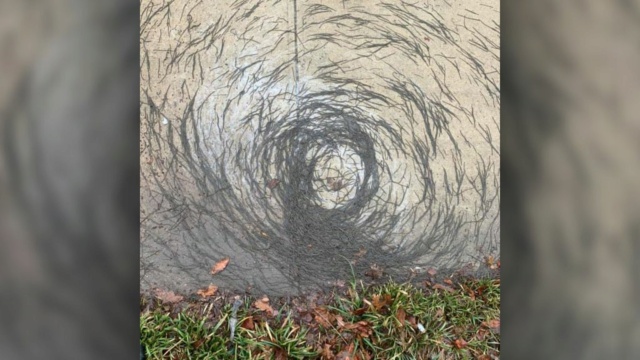 Spring rains often bring scores of earthworms to the surface, where they writhe on top of soil and sidewalks. But recently, heavy rainfall in a town near New York City was followed by something a little more unusual: a wormnado.

A resident of Hoboken, New Jersey was out for a morning walk in a park near the Hudson River on March 25, when she spotted hundreds of worms spread along the walkway. The woman, who asked not to be identified, told Live Science that after her initial surprise she noticed something even more bizarre — a number of the worms had formed a cyclone-like shape, creating a spiral where the edge of the grass met the concrete.

The woman took photographs and sent them to Tiffanie Fisher, a member of the Hoboken City Council, who shared the images of the "tornado of worms" on Facebook. "Clearly worms come out after it rains but this is something I've never seen!" Fisher wrote in the post.

When the photographer saw the worm tornado, they weren't actively spiraling, although individual worms still wriggled in place, she told Live Science. There were no open pipes nearby, and though most of the worms were spread out in a big swirl, there were plenty of worms extending beyond the outer curve of the wormnado; they clung to the wall of a nearby building, and dribbled down the curb and into the road, the woman said.