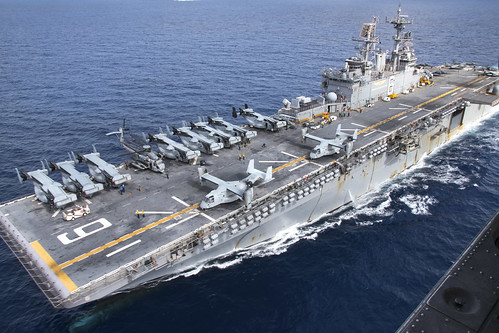 Amphibious landing ship USS Bonhomme Richard has exploded and is currently on fire in the Navy port just south of San Diego.  The ship is 843-feet long, and can carry a ship's compliment of 1,000 men and women.  The winds are carrying the smoke south, away from residential areas.

Only approximately 160 aboard at the time.  Sixteen of them were hospitalized with non-life-threatening injuries.  The ship was undergoing overhaul, and even fewer were aboard as it was a weekend.

Fire started when a barrel of cleaning fluid ignited in an overheated storage quarters.

Owing to fuel aboard (over 1-million gallons), the Navy has ordered all civilian firefighters off the ship, and away from the dock.  Only Navy personnel now involved in fighting the fire.
_________________
“Little thieves are hanged, but great thieves are praised.” — Old Russian proverb, offered by Vlad Putin to Donald Trump, Helsinki, July, 2018.

Today at 4:27 pm by Original Quill

Today at 4:22 pm by Original Quill

Yesterday at 2:47 am by Original Quill

» What would you have done?

» A man accused of murdering two women and storing their bodies in a freezer is a registered sex offender who once "married" a 14-year-old girl, a court has heard.

» But Donnie, who would be president?