We have just learned that babies infected with herpes as part of metzitzah b’peh, a controversial circumcision rite performed by many ultra-Orthodox Rabbis has just reached 14. 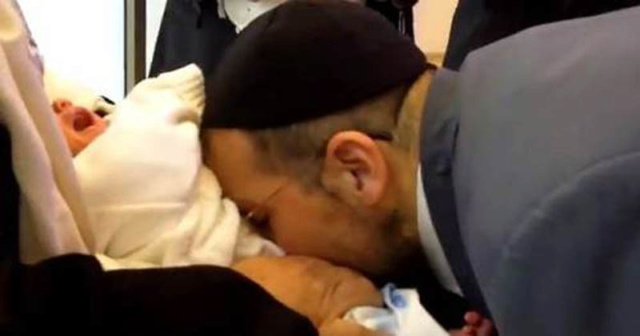 During the circumcision rite the Rabbi sucks the blood from the penis after the foreskin has been cut, a rite that is still exposing children to herpes. The strangest part of this story has been the lack of involvement from the Office of Child Protection which has yet to confirm if the department is enforcing the parental consent form.

Since we last brought you this story more babies have been infected according to Jewish Daily Forward.

New York City has denied a second attempt by the Jewish Daily Forward to obtain information about consent forms gathered under a regulation that warns parents about metzitzah b’peh, a controversial circumcision rite.

The city also refuses to say whether such forms even exist.

A regulation that came into force at the beginning of 2013 compels mohels to have parents sign a health department form warning that mohels can transmit herpes to infants during MBP, as the rite is often known.

During the rite, the mohel places his mouth on the infant’s penis to suction blood from the circumcision wound.

The health department says 14 infants have been infected in the city as a result of MBP since 2000. Two of those babies died and at least two others suffered brain damage.

Under the health department regulations, mohels must keep a copy of the consent forms, signed by an infant’s parents, for the first year after a circumcision with MBP is performed.

Some more info on this Eddie

Some more info on this Eddie

Page 1 of 1
Permissions in this forum:
You cannot reply to topics in this forum
Latest topics
» Illegal immigrant numbers crossing English channel in small boats is at record high

Yesterday at 8:01 pm by Maddog