Why All Antisemitism is Wrong

Why All Antisemitism is Wrong 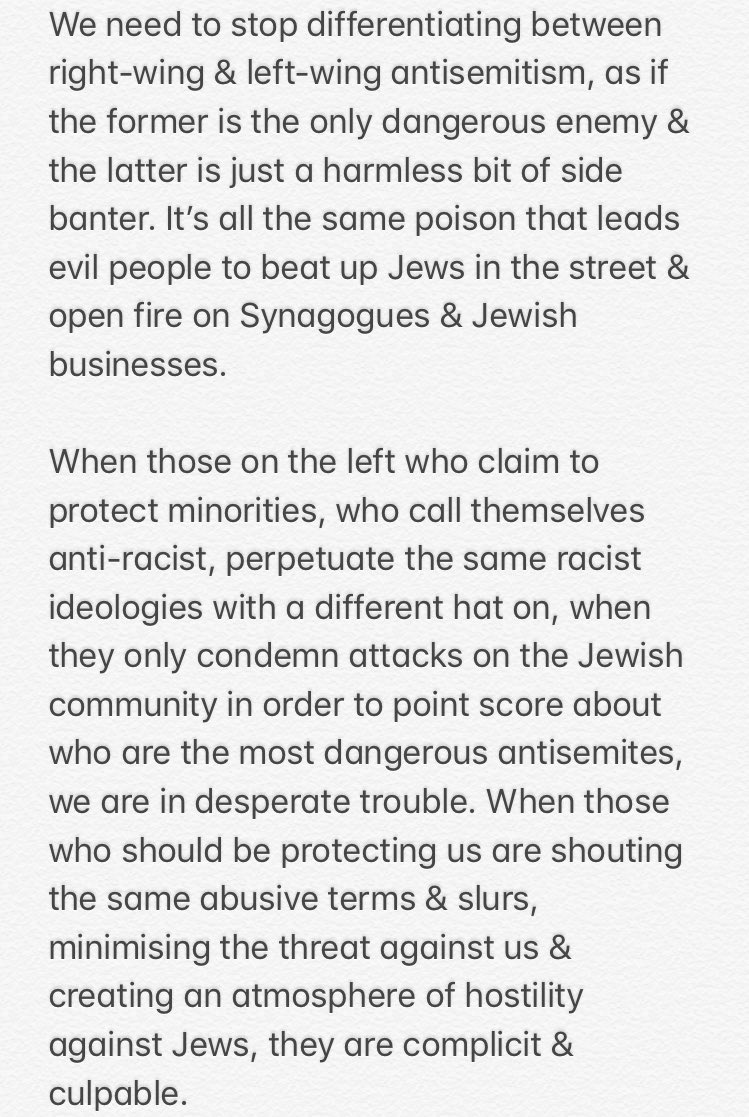 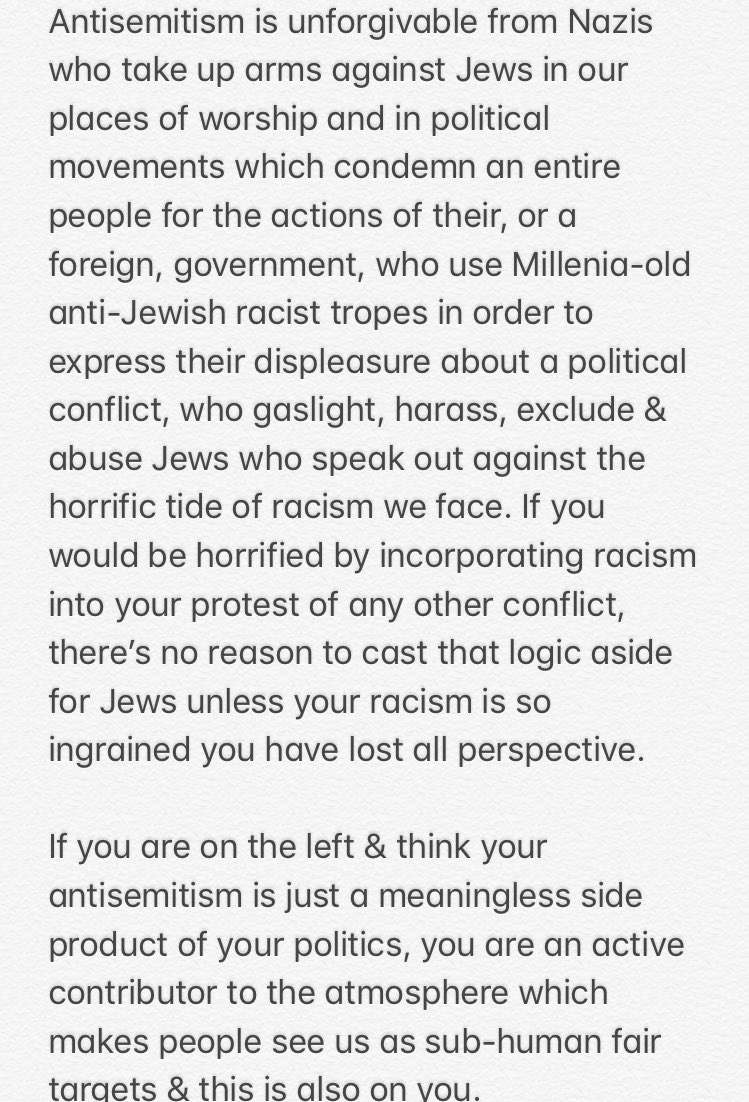 Agreed, but when you have Medhi Hasan saying this of Netanyahu condeming Turkey here.

Instead of actually condemning Turkey here. He used this with a view to attack israel
Surely as both myself and Medhi condemn Netanyahu for his polices. Where he has not ethically cleansed the Palestinians and Medhi used the war started by the arab invasion of israel with the displacement of Arabs from this. To then go into overdrive on Israel and Netanyahu on this conflict started by the Arabs in history. What can anyone draw from this when Medhi should be condemning Turkey here? His view was to make Israel out worse through the worst whaboutism going and then proceed to post views about Israel and Israeli's

Is that antisemitism Ben?

When people have an over an obssesive view to have a go against Israel and ignore far worse situations.
What would you call this Ben?

Xenophobia against Israel?
Hate and racism against israel?
Antisemitism?
What you should ask is where that hate is stemming from. As again why the obsession with Israel?

Being critical of Israeli policies is not antisemitic
Where Turkey is in the wrong and you then to look to deflect and rewrite history in regards to history with Israel. Is certainly borderline antisemitism. As the view here should be to join Netanyahu in condemning Turkey surely?

Anybody could put 100 percent of their focus on criticism of the Israeli government's actions and it still wouldn't be antisemitism.

I agree that that example was whataboutism, and other examples could lack perspective, be short-sighted, etc., but only blanket attacks on Jews as a whole are antisemitic. Anything else is anti-Israel at worst.
_________________
“Hatred is the coward's revenge for being intimidated.”

Ben Reilly wrote:Anybody could put 100 percent of their focus on criticism of the Israeli government's actions and it still wouldn't be antisemitism.

I agree that that example was whataboutism, and other examples could lack perspective, be short-sighted, etc., but only blanket attacks on Jews as a whole are antisemitic. Anything else is anti-Israel at worst.

Of course it could be antisemitism if antisemitism was the factor for the criticism of Israel. Its understanding this. Where for example the most ardent critics of Israel also happen to be antisemitic. Based on the antisemitic troupes they use and explain in the original statement

The point is here Medhi never actually condemned what Turkey was doing. His point was to make falsifications on history to attack israel. The worlds only Jewish state

Like I said Ben, most hate of israel stems often from antisemitism

Hence its important to understand whether that criticism is formed from antisemitism or a genuine criticisim of israel. When said proponents argue thaT Israel should not exist. Or the Jews should not have self dtermination. That stems from antisemitism. As can you find any other country faced with its very right to exist by people?

So, "Anti-Semitism, [is] hostility toward or discrimination against Jews as a religious or racial group."

Original Quill wrote:So, "Anti-Semitism, [is] hostility toward or discrimination against Jews as a religious or racial group."

The US State Department has revised its definition of anti-Semitism and included “drawing comparisons of contemporary Israeli policy to that of the Nazis” to its growing list of examples of anti-Jewish hatred. An earlier definition of anti-Semitism adopted by the State Department cited 10 examples of which three were related directly to criticism of Israel, including “claiming that the existence of a State of Israel is a racist endeavour.”

Israel has always given up land for peace further disproving the unfounded claim of a Lebensraum policy
The question is why you consistantly continue with this lie?
Because you want people to hate Israeli jews by comparing them to the Nazsi's

Oh and by the by Ben. Do you think this is genuine criticism by Quill?
When he uses comparisons to the worst ideology in history to that of the only Jewish state? Do you see how this can and does cross over into antisemitism?

This is not genuine criticism. This is people inventing a lie for one single purpose. To make it acceptable to hate Jews. Because its Jews that govern Israel and if you promote a view that are comparable to nazis. What effect do you think this has on Jews globally. If such an unfounded lie takes hold. There is no such Lebensraum policyand hence the only reason people make such false claims has only one single purpose. To make it acceptable to hate Jews. As we already accrept that Nazism is hateful. So applying a view to make Israel poilicy comparable to the worst barbaric regeme in history. Is people not being genuinely critical. But applying a lie in order to make hating Jews acceptable. Being that 95% of Jews back the state of Israel. No matter if they agree or disagree with Governement policies. When people argue that Israel is comparable to the Nazi's or Aparthied. Both false of course. They are attempting to make hate acceptable. Being as its acceptable to hate aparthied and Nazism

The fact you have often allowed quoill to get away with this lie when its blatant antisemitism. Is what I find poor in your reasoning or your understanding of how antisemitism mutates and forms.

Quill uses the same extreme views on the Police, southern people etc, because to him. Its all about creating hate of groups of people. Making him no better than a white supremacist.

I am all for genuine criticism of Israel and claiming Israel has adopted a Nazi policy has only one intent. To make Israel comprable to the Nazis. To make it acceptable to hate them. That is unadulterated racism.

As no Israel policy calls for the starvation of the palestinian population. Making them work to death through starvation. Shooiting them in mass numbers, whilst they dig their own graves. Placing them in death camps etc. What we see is Israel continually give up land for peace and continually offer this. To make this comparable to the naked aggression of the nazis. Is abhorant by Quill,. He would never apply this to the formation of the US which was based on ethnic cleasning and living space.

This is why I think quill is a vile racist. He promotes hate against whites and even worse Jews. But some how that is okay on this forum

For centuries - Jews were persecuted and massacred - as the populations of the world were unwilling to allow Jewish people the right to live. The entire anti-Israel movement is just a continuation of this -a reluctance to allow a tiny space in the world for Jews to call their own

Absolutely no comparison can be made between the complex Israeli-Palestinian conflict and the atrocities committed by the Nazis against the Jews. Nor can Israeli actions or policies be characterized as acts of ethnic cleansing or genocide.

In contrast to Holocaust and more recent examples of genocide and ethnic cleansing in Darfur, Rwanda and Kosovo, there is no Israeli ideology, policy or plan to persecute, exterminate or expel the Palestinian population – nor has there ever been. Israeli policies toward the Palestinians are based on its need to defend its population and combat threats to Israel’s security, while promoting a negotiated resolution of the Israeli-Palestinian conflict.

In direct contrast, the Nazis’ “final solution” to the “Jewish problem” was the deliberate, systematic and mechanized extermination of European Jewry. Hitler’s final solution led to the calculated, premeditated murder of six million Jews and the destruction of thriving Jewish communities across Europe.

Those that make the comparison between the Jewish state and the Nazis and Hitler – who perpetrated the greatest and largest act of anti-Semitism in world history – have not chosen this comparison innocently or dispassionately. It is a charge that is purposefully directed at Jews in an effort to associate the victims of Nazi crimes with the Nazi perpetrators, and serves to diminish the significance and uniqueness of the Holocaust. To make such a comparison constitutes blatant hostility toward Jews, Jewish history and the legitimacy of the Jewish State of Israel.

Didge doing a fair impression of Julia Fartley-Blower, holding a discussion with himself - 4 posts in a row.

_________________
I have never met a caring sharing and compassionate Tory.
Tories and far right wingers. All liars and only it it for themselves.

At least there not filled with hate, as yours are !

Page 1 of 1
Permissions in this forum:
You cannot reply to topics in this forum
Latest topics
» BLM...... IS IT THE MOST RACIST GROUP EVER??

» More than 9 out of 10 Black Lives Matter demonstrations involved no violence or property crime, showing the right up as liars

Yesterday at 11:53 pm by Original Quill

Yesterday at 6:04 pm by Original Quill

Yesterday at 5:44 pm by Original Quill

Yesterday at 5:21 pm by Original Quill

Yesterday at 5:18 pm by Original Quill

» Artist Paints Beautiful Portrait By Making Handprints With His Daughter