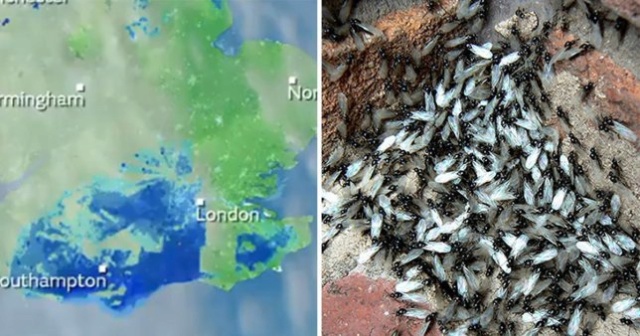 A cloud of flying ants that hit the south coast on Wednesday was so dense it could be seen in satellite images from space. The swarm of insects hit the counties of Hampshire, West Sussex and Dorset and were captured on the Met Office’s radar. They were also spotted in East Sussex and Kent. The weather was perfect for ants to move into the ‘nuptial flight’ phase of their reproduction, also known as ‘flying ant day’ – where virgin queen ants are followed by male ants hoping to mate.

A Met Office spokesperson said the ants showed up on their image as a showers of rain because ‘the radar thinks the beams are hitting raindrops not ants’. It may have seemed like it was actually raining ants because male ants who have successfully mated shed their wings and fall to the ground where they will start new colonies. Flying ants are mostly harmless to humans, but they do have a strange effect on seagulls who can appear drunk after eating a few due to formic acid they expel. A flying ant day usually occurs when a spell of wet weather is followed by hot humid weather. Although referred to as a day, the mating ritual can last for several weeks in high summer. By the end, billions of ants will have taken to the skies.

Re: Britain invaded by so many randy ants they were spotted on weather maps

That was weird to see the other day, and funny that people thought it was happening because there was a thunderstorm on the way

Yesterday at 5:51 pm by Lurker

Yesterday at 9:50 am by Maddog

Yesterday at 9:47 am by Maddog