THE DEATH of Joy Gardner, a 40-year-old Jamaican mother, on a life-support machine in the intensive care unit of the Whittington Hospital in Archway, north London, is the sort of subject of which myths - and anti-police riots - are made.

Mrs Gardner died on Sunday night, some days after an early morning raid by five police officers and an immigration officer attempting to serve her with a deportation order. The incident is reminiscent of the events leading up to the Broadwater Farm riots, in which shots were fired and a policeman hacked to death. The violence there erupted after a black woman, Cynthia Jarrett, died during a police raid on her north London home in October 1985.

The few undisputed facts are these: Mrs Gardner, then single, arrived in this country on a six- month visitor's visa in 1987. Her visa lapsed and for almost three years she lived as an illegal immigrant. This, of course, is a serious criminal offence.

In 1990 she applied to legalise her position. By then she had a two-year-old son and had (very recently) acquired a husband. But the marriage appeared to have broken down within weeks. Her husband declined to support her application, and it was turned down. Mrs Gardner was served with 'a notice of intention to deport'. For the next couple of years her lawyers sought to persuade the Home Secretary that there were 'compelling and compassionate circumstances' not to send her back to the West Indies. They were unsuccessful.

A deportation order was signed in April 1992, but by then the immigration authorities were once again unable to trace Mrs Gardner, who, they felt, had shown a marked propensity to vanish at crucial moments. Eventually she was found and her lawyers were given notice in two letters dated 26 and 27 July 1993 that arrangements for her deportation would 'shortly be made'.

During a police raid on her home in Crouch End, London, she was restrained with handcuffs and leather straps and gagged with a 13-foot length of adhesive "Elastoplast" tape wrapped around her head.[4] Unable to breathe, she collapsed and suffered brain damage due to asphyxia.[5] She was placed on life support but died following a cardiac arrest four days later.[6] In 1995, three of the police officers involved stood trial for Gardner's manslaughter, but were acquitted.[7]

The case became a cause célèbre for civil rights and justice campaigners, and for the first time brought wide public attention to what the Modern Law Review called "the inhumanity of the methods used routinely in the execution of deportation orders".[8][9] Despite continuing pressure by campaigners, no coroner's inquest or public inquiry into the circumstances of Gardner's death has been held.[10] 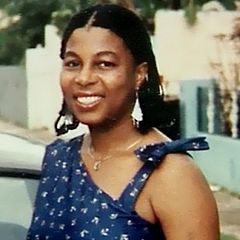 ‘She is a martyr’: 25 years on, Joy Gardner’s mother is still fighting for justice after death in custody