Sometimes it seems that Americans will believe anything.  And what we know as true or not true these days can depend on our political point of view.  But there are many of us who are willing to give at least some credence to the possibility that a claim might be true.

At least that seems to be the case in the latest Economist/YouGov Poll.  One of the most notorious internet rumors of the 2016 presidential campaign, that there was a pedophile ring in the Clinton campaign, with code words embedded in the hacked emails of Clinton campaign manager John Podesta, is seen as “probably” or “definitely” true by more than a third of American adults.  The poll was conducted after an armed North Carolina man tried to “self-investigate” the claim by going to the District of Columbia pizza restaurant that was alleged to be the center of the ring earlier this month and found nothing.  But even afterwards only 29% are sure the allegation is “definitely” not true. 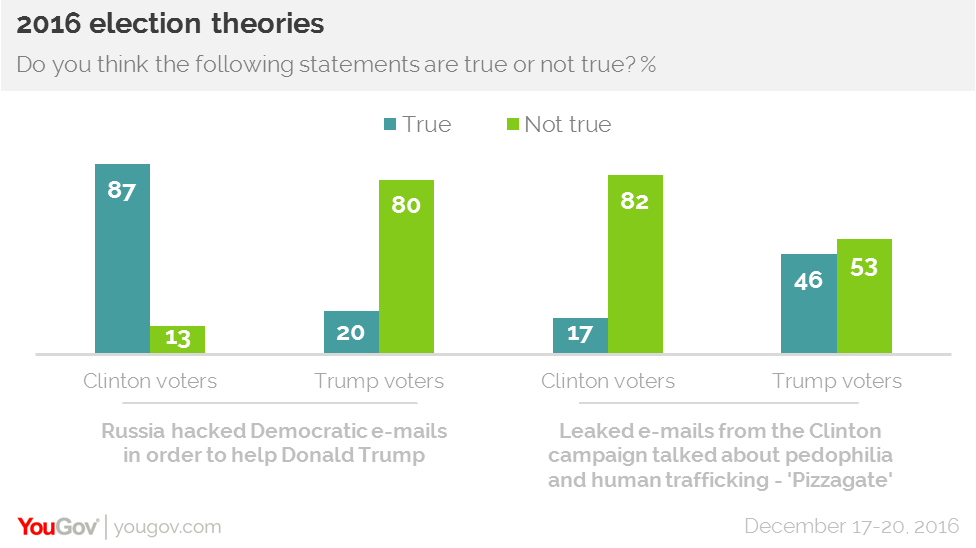 Similarly, even after the Central Intelligence Agency and the Federal Bureau of Investigation reported that Russia was responsible for the leaks of damaging information from the Democratic National Committee and the Clinton campaign and that the hacking was done to help Donald Trump win the Presidency, only one in five say that is definitely true, about the same percentage as believe it is definitely not true.  A majority is in the middle.

These beliefs have a political basis, of course.  Nearly all Clinton voters (87%) believe Russia hacked Democratic emails.  Eight in ten Trump voters disagree.  On the other hand, nearly half of Trump supporters give at least some credence to the Pizzagate rumors.   In contrast, 57% of Clinton voters say that is definitely not true (some, however, answered that it could be true),

Once a story is believed, it also seems to stay believed.  Donald Trump may have proclaimed that President Obama was born in the United States (having doubted that for years), but half of his supporters still think that it is at least probably true that the President was born in Kenya.  And in the U.S. as a whole, a majority believes that in 2003, when the United States invaded Iraq, Saddam Hussein had weapons of mass destruction that the U.S. never found. 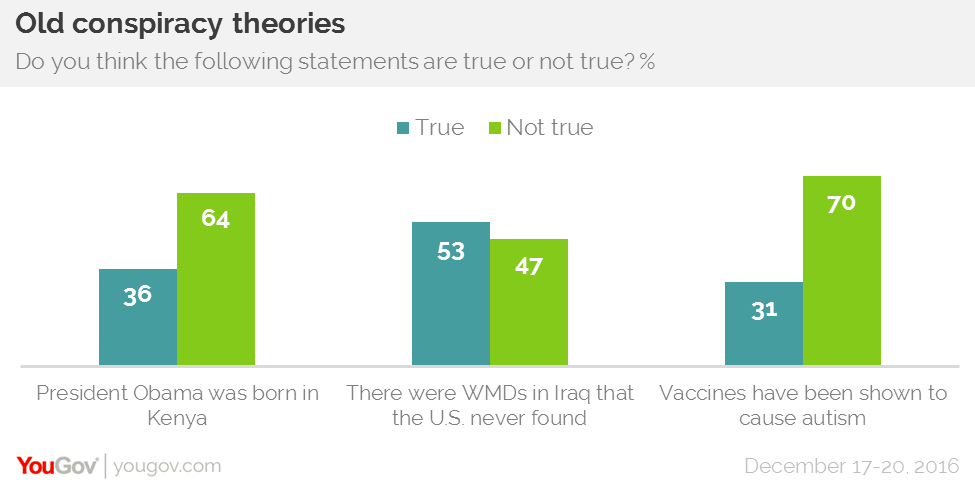 Trump voters and Clinton voters also look differently at two Election Day conspiracy theories: that Russia actually hacked the votes to change the election results, and that there were, as Donald Trump suggested, there were “millions of people who voted illegally.”

Half of Clinton’s voters think Russia even hacked the Election Day votes (only 9% of Trump voters give that any credibility at all).  Six in ten Trump voters believe there were millions of illegal votes cast on election day.  One in four Clinton voters agree with that, though it’s likely that the illegal votes Clinton voters think were cast were quite different from the illegal votes Trump voters see.   In an Economist/YouGov Poll conducted a few days after the election, just 2% of those who voted on Election Day said they saw any ineligible voters trying to cast a ballot (and there was almost no difference in the proportion of Clinton supporters and Trump supporters saying this). 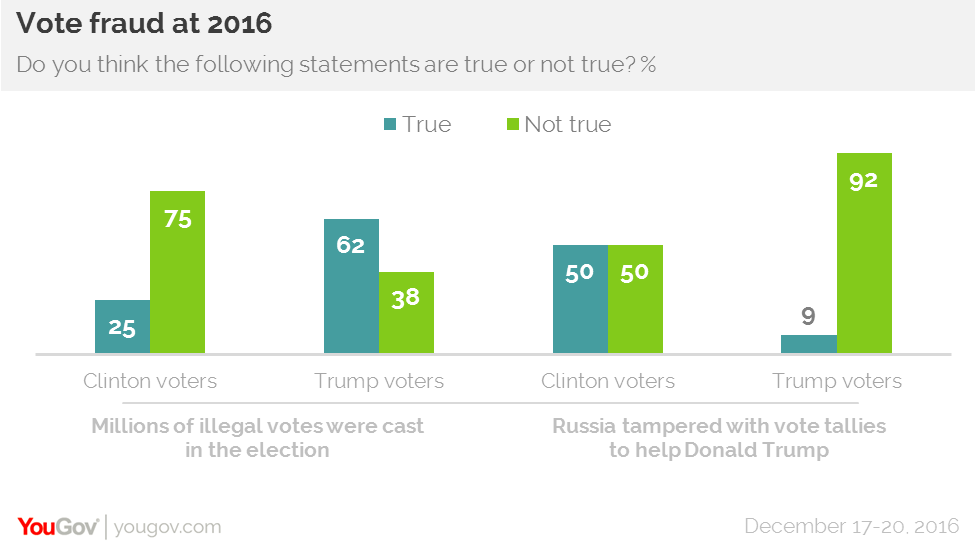 Conspiracy theories don’t always divide partisans.  Trump voters and Clinton voters are as likely to believe that the U.S. government helped plan the attacks of September 11, 2001 -- or more precisely, as likely to disbelieve that conspiracy theory.  Eight in ten in both groups say that is at least probably not true.

There is somewhat more belief that vaccines can cause autism.  However, majorities in both groups don’t believe they do.  Slightly more (but only slightly more).  Clinton voters are skeptical about any link between vaccines and autism.

One conspiracy gets greater support from both sides of the election divide.  Nearly half of both groups suspect that the 2008 financial crisis was “secretly organized by a handful of Wall Street bankers.” 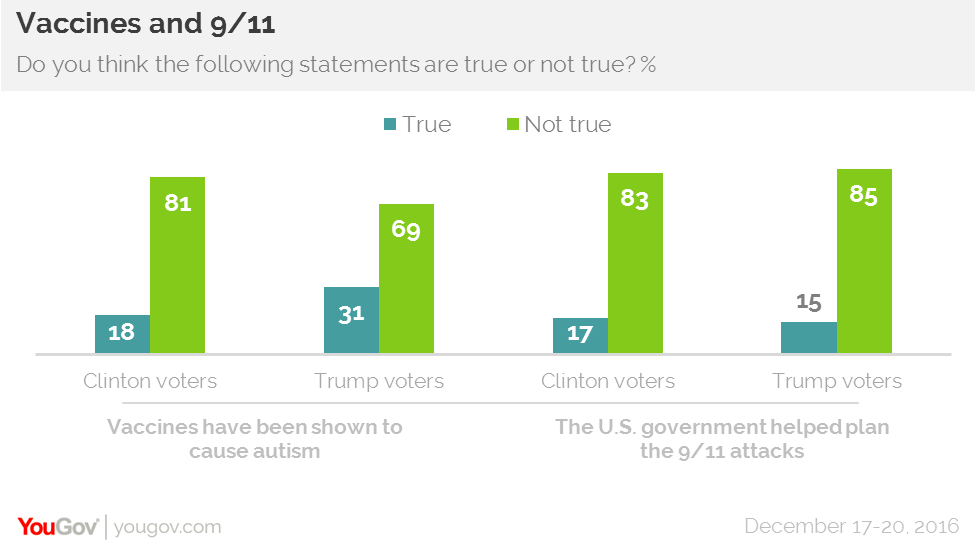 Candidate preference seems to mean more than age, education and political interest when it comes to which of these conspiracies someone is likely to believe.  While there were some differences by demographic categories, they were relatively small within each candidate’s voters.  On some of these questions, however, those who didn’t vote were even more likely to believe a theory.  That was especially true on the question about 9/11.

See the rest of this week's YouGov/Economist Poll

I think patriotism is so ingrained and brainwashed into young American children pretty much from birth, that they have a hard time trying to appreciate that their country lies more than a dirty cheating husband in a whorehouse.
The biggest enemy to American citizens is their own government.
_________________
”Do I contradict myself? Very well; I contradict myself. I am vast, I contain multitudes”
~ Walt Whitman

The biggest conspiracy purveyor if you are talking about government is the Republican Party...remember?  The party that gave you WMD's in Iraq, birtherism, yellow cake in Nigeria, Obama is a Muslim, and death panels in the AFA?  They are second only to the Russians with their dezinformatsiya, or disinformation program, but catching up fast.

The most brilliant conspiracy theory in recent decades was the Republican thesis that Hillary is a criminal, or that there was anything at all to her use of a private email server.  Going back to the 1990's, the Republicans have used the Clinton pair as guinea pigs for their experiments in dezinformatsiya.  Whitewater?  The suicide of Vince Foster?  Slowly, but subtly, the scandals turned to Hillary, as she became the heavyweight political figure.  Benghazi?  The IRS in Cincinnati?  And finally, the emails.  All of the Clinton conspiracies have one thing in common other than that they have been inspired by Republicans...there's no there there.  As one commentator says:

The Atlantic wrote:The emails represent something of a classic Clinton scandal. Although the House investigation turned up no evidence of wrongdoing on her part with respect to the attacks themselves, it was during that inquiry that her private-email use became public. This is a pattern with the Clinton family, which has been in the public spotlight since Bill Clinton’s first run for office, in 1974: Something that appears potentially scandalous on its face turns out to be innocuous, but an investigation into it reveals different questionable behavior.   The canonical case is Whitewater, a failed real-estate investment Bill and Hillary Clinton made in 1978. Although no inquiry ever produced evidence of wrongdoing, investigations ultimately led to President Clinton’s impeachment for perjury and obstruction of justice.

And that's the core of the Republican effort: when the search turns from actual wrongdoing to clues of irregularity themselves, the latter becomes, not a lead, but the crime itself...a commitment to the smoke is fire thesis.  The Clintons are guilty only of making Republicans follow false leads.  Never mind that nothing is confirmed.  Never mind the lust for rancor that motivates Republicans.  In this age it is required only that you have the commitment.

Study of the Clintons since Whitewater in 1978, is an excellent study in conspiracy theories as a subject matter, how they start, what motivates them, and how they come out.  From flying saucers, to the death of Kennedy, to black men want to rape our women, to Benghazi and Hillary's emails...it goes from the bizarre to electing presidents.
_________________
“Little thieves are hanged, but great thieves are praised.” — Old Russian proverb, offered by Vlad Putin to Donald Trump, Helsinki, July, 2018.

Page 1 of 1
Permissions in this forum:
You cannot reply to topics in this forum
Latest topics
» Jo Jorgensen Wins Libertarian Party Presidential Nomination

Yesterday at 10:41 pm by Original Quill

Yesterday at 3:58 pm by Maddog