As the rich get richer everyone else gets less happy

As the rich get richer everyone else gets less happy

Research suggests that as the wealth of the richest explodes, the rest of us are left stressed, worried, angry and with lower levels of life satisfaction

The wealth of the richest is exploding. According to research by Oxfam, the richest 62 billionaires have the same amount of wealth as 3.6 billion people – the poorest half of the world’s population. Last year this figure was 80; two years ago it was 85.

Despite growing concern over the economic and social implications of the increasing concentration of wealth among a wealthy elite, we continue to know very little about how the growing gap in wealth and income of the top 1% influences the wellbeing of the other 99%.
Together with Richard Burkhauser at Cornell University, we decided to find out. We wanted to estimate how the rising income of the 1% relates to average life satisfaction, even where household income and a country’s GDP remain constant.
We started our research by asking if income inequality at the very top really matters to the life satisfaction of the average person in a country – the results show that there is a correlation between the two. Using data from the World Top Incomes Database and the Gallup World Poll, we compared the share of taxable income held by the top 1% in each country with reported levels of life satisfaction over the last 30 years. We found that a 1% increase in the share of taxable income held by the top 1% hurts life satisfaction as much as a 1.4% increase in the country-level unemployment rate.

This is a stark reminder that it’s not just about how much you have, nor even how much you have relative to everyone else, but also how much the top 1% has. With that level of income accumulation, even if you are a member of the relatively well-to-do middle class some things start getting priced beyond your reach, such as housing.

In addition, there may be psychological reasons driving the correlation between rising top incomes and decreased average wellbeing: a rise in the share of income held by the richest 1% could make you feel as if your chance of moving up the ladder is growing increasingly beyond your reach.

This is particularly true for certain groups of people. We found that people who are young, less educated or on low incomes tend to suffer more as the richest get richer. It’s not clear why, but one explanation could be that these individuals are often the furthest away from the very top of the income distribution. 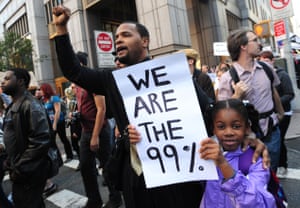 Facebook [url=https://twitter.com/intent/tweet?text=As the rich get richer everyone else gets less happy&url=http%3A%2F%2Fgu.com%2Fp%2F4g8ae%2Fstw%23img-2] Twitter [/url] Pinterest
Occupy Wall Street protestors in New York march from City Hall to the financial district. Photograph: KeystoneUSA-ZUMA/Rex Features
However, we did find that negative emotional experiences rose along with the incomes of the top 1%. In societies where the richest hold most of the country’s income, people were more likely to report feeling stressed, worried, or angry on the day before we interviewed them.

There has been ongoing debate about whether rising top income shares is a good thing. There are those – particularly on the right of the political spectrum – who argue that rising top incomes are good for social welfare as the poor will eventually benefit from the trickle-down economy. However, others say that income inequality at the very top creates a clear divide between rich and poor.

Our study makes a small attempt to try and settle the argument by showing that, on average, aggregate life satisfaction goes down as the richest becomes richer.