Subsidies for small scale solar electricity panels on homes are to be cut, the government has announced, although by less than expected.

The subsidies will be cut by 64%, although this is less than the previous proposal of an 87% reduction.

The cuts have been softened following a storm of criticism. (they shouldn't have any bloody cuts)

The government says large-scale solar farms are cost-competitive, but the sector says it is being forced to stand on its own feet before it is ready.

The industry is worried about a new government cap on the volume of solar installations.

UK Energy Secretary Amber Rudd said: "We have to get the balance right and I am clear that subsidies should be temporary, not part of a permanent business model.

"When the cost of technologies come down, so should the consumer-funded support".

However, Leonie Greene from the Solar Trade Association said: "We thought the government had listened more to our case. We are very disappointed".

Environmental group Friends of the Earth called the cuts a "hammer blow":

"The cuts come just a day after the government pushed through plans to allow fracking beneath National Parks and protected areas.

"It's outrageous that the government continues to hand out billions of pounds in subsidies every year to climate-wrecking fossil fuels, while trying to block the clean energy sources we urgently need."

Keeping the lights on

Domestic solar subsidies were said to be costing households about £7 a year. The industry said the planned cuts announced in the summer have already cost 6,500 jobs.

The government says its main priorities are keeping the lights on and holding bills down. But its downgrading of renewables since the election has already deterred some investors from the UK.

Its squeeze on the solar industry has successfully reduced billpayer support, but industry sources say the manner in which it was performed has reduced investor confidence.

Now the former CBI chief, Lord Turner, has told the BBC that he fears a government rift over the low-carbon agenda which the UK backed at the Paris climate talks at the weekend.

Lord Turner, a former head of the government's advisory Climate Change Committee, said he believed that the Prime Minister was committed in his heart to tackling climate change along with the energy department DECC, but that the Treasury was not.

He said: "I would love - as someone who believes that we have to make better effective action on climate change - that George Osborne was more a believer of this in his heart and fundamentally I don't think he is."

Asked if that was a problem for public policy he said: "Yes I think it is. Within the combination of the departments in the UK government and the ministers in the UK government, it is the Treasury which is probably the one which we have to make sure does not undermine our commitment to achieving strong reduction in our carbon emissions."
http://www.bbc.co.uk/news/business-35119173

Sometimes you just want to bang heads together!

Mind you, this could be one of the reasons: 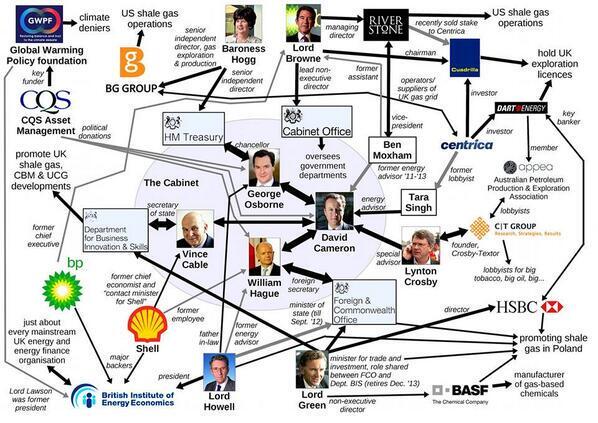 Bloody hell Sass, that looks like a snakes and ladders board.

Does doesn't it lol   Interesting though the way they are all linked by financial interests.