Local doctors are in the eye of a storm swirling for the past three years over whether corn that’s been genetically modified to resist pesticides is a source of prosperity, as companies claim, or of birth defects and illnesses 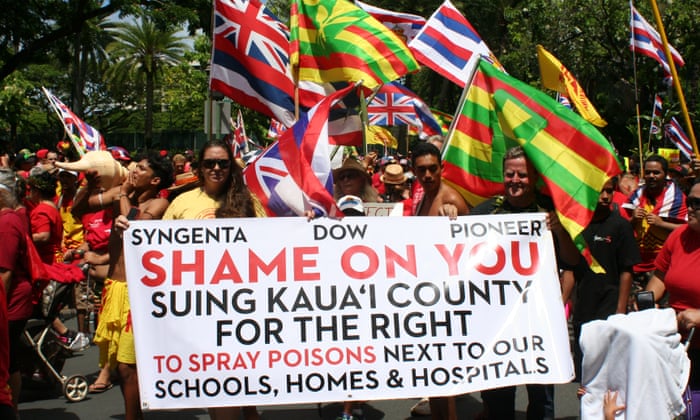 After four separate attempts to rein in the companies failed, an estimated 10,000 people marched through Honolulu’s Waikiki tourist district.

Pediatrician Carla Nelson remembers catching sight of the unusually pale newborn, then hearing an abnormal heartbeat through the stethoscope and thinking that something was terribly wrong.
The baby was born minutes before with a severe heart malformation that would require complex surgery. What worried her as she waited for the ambulance plane to take the infant from Waimea, on the island of Kauai, to the main children’s hospital in Honolulu, on another Hawaiian island, was that it was the fourth one shehad seen in three years.
In all of Waimea, there have been at least nine in five years, she says, shaking her head. That’s more than 10 times the national rate, according to analysis by local doctors.
Nelson, a Californian, and other local doctors find themselves in the eye of a storm swirling for the past three years around the Hawaiian archipelago over whether a major cash crop on four of the six main islands, corn that’s been genetically modified to resist pesticides, is a source of prosperity, as the companies claim – or of birth defects and illnesses, as the doctors and many others suspect.
After four separate attempts to rein in the companies over the past two years all failed, an estimated 10,000 people marched on 9 August through Honolulu’s Waikiki tourist district. Some held signs like, “We Deserve the Right to Know: Stop Poisoning Paradise” and “Save Hawaii – Stop GMOs” (Genetically Modified Organisms), while others protested different issues.
“The turnout and the number of groups marching showed how many people are very frustrated with the situation,” says native Hawaiian activist Walter Ritte of the island of Molokai. 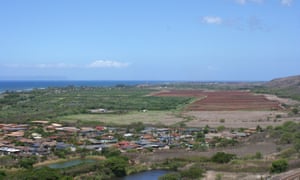 Facebook Twitter Pinterest
Waimea and the GMO fields. The two orange-roof buildings at bottom left are the Middle School. The one to its right is the hospital. Photograph: Christopher Pala for the Guardian
Waimea, a small town of low, pastel wood houses built in south-west Kauai for plantation workers in the 19th century, now sustains its economy mostly from a trickle of tourists on their way to a spectacular canyon. Perhaps 200 people work full-time for the four giant chemical companies that grow the corn – all of it exported – on some 12,000 acres leased mostly from the state.
In Kauai, chemical companies Dow, BASF, Syngenta and DuPont spray 17 times more pesticide per acre (mostly herbicides, along with insecticides and fungicides) than on ordinary cornfields in the US mainland, according to the most detailed study of the sector, by the Center for Food Safety.
That’s because they are precisely testing the strain’s resistance to herbicides that kill other plants. About a fourth of the total are called Restricted Use Pesticides because of their harmfulness. Just in Kauai, 18 tons – mostly atrazine, paraquat (both banned in Europe) and chlorpyrifos – were applied in 2012. The World Health Organization this year announced that glyphosate, sold as Roundup, the most common of the non-restricted herbicides, is “probably carcinogenic in humans”.
The cornfields lie above Waimea as the land, developed in the 1870s for the Kekaha Sugar Company plantation, slopes gently up toward arid, craggy hilltops. Most fields are reddish-brown and perfectly furrowed. Some parts are bright green: that’s when the corn is actually grown.
Both parts are sprayed frequently, sometimes every couple of days. Most of the fields lie fallow at any given time as they await the next crop, but they are still sprayed with pesticides to keep anything from growing. “To grow either seed crops or test crops, you need soil that’s essentially sterile,” says professor Hector Valenzuela of the University of Hawaii department of tropical plant and soil science.
When the spraying is underway and the wind blows downhill from the fields to the town – a time no spraying should occur – residents complain of stinging eyes, headaches and vomiting.
“Your eyes and lungs hurt, you feel dizzy and nauseous. It’s awful,” says middle school special education teacher Howard Hurst, who was present at two evacuations. “Here, 10% of the students get special-ed services, but the state average is 6.3%,” he says. “It’s hard to think the pesticides don’t play a role.”
At these times, many crowd the waiting rooms of the town’s main hospital, which was run until recently by Dow AgroSciences’ former chief lobbyist in Honolulu. It lies beside the middle school, both 1,700ft from Syngenta fields. The hospital, built by the old sugar plantation, has never studied the effects of the pesticides on its patients.
The chemical companies that grow the corn in land previously used for sugar refuse to disclose with any precision which chemicals they use, where and in what amounts, but they insist the pesticides are safe, and most state and local politicians concur. “The Hawai‘i legislature has never given the slightest indication that it intended to regulate genetically engineered crops,” wrote lawyer Paul Achitoff of Earthjustice in a recent court case.
As for the birth defects spike, “We have not seen any credible source of statistical health information to support the claims,” said Bennette Misalucha, executive director of Hawaii Crop Improvement Association, the chemical companies trade association, in a written statement distributed by a publicist. She declined to be interviewed.
Nelson, the pediatrician, points out that American Academy of Pediatrics’ report, Pesticide Exposure in Children, found “an association between pesticides and adverse birth outcomes, including physical birth defects”. Noting that local schools have been evacuated twice and children sent to hospital because of pesticide drift, Nelson says doctors need prior disclosure of sprayings: “It’s hard to treat a child when you don’t know which chemical he’s been exposed to.”
Her concerns and those of most of her colleagues have grown as the chemical companies doubled to 25,000 acres in a decade the area in Hawaii they devote to growing new varieties of herbicide-resistant corn.
Today, about 90% of industrial GMO corn grown in the US was originally developed in Hawaii, with the island of Kauai hosting the biggest area. The balmy weather yields three crops a year instead of one, allowing the companies to bring a new strain to market in a third of the time.
Once it’s ready, the same fields are used to raise seed corn, which is sent to contract farms on the mainland. It is their output, called by critics a pesticide delivery system, that is sold to the US farmers, along with the pesticides manufactured by the breeder that each strain has been modified to tolerate.
Corn’s uses are as industrial as its cultivation: less than 1% is eaten. About 40% is turned into ethanol for cars, 36% becomes cattle feed, 10% is used by the food industry and the rest is exported.

‘We just want to gather information’ 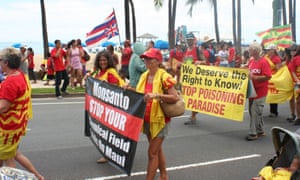 I will not let anyone use Roundup near me.  Monsanto has a lot to answer for, but with TTP it will get more and more powerful and will be allowed to poison the planet for profit.

Where does it leave white marks, you've lost me.

sassy wrote:Where does it leave white marks, you've lost me.

Oh right!  If it does that to paving stones, think what it does to your skin and insides as it gets in the air, in your lungs and on your skin, then it gets absorbed into the ground and ends up in the water.

sassy wrote:Oh right!  If it does that to paving stones, think what it does to your skin and insides as it gets in the air, in your lungs and on your skin, then it gets absorbed into the ground and ends up in the water.

sassy wrote:Oh right!  If it does that to paving stones, think what it does to your skin and insides as it gets in the air, in your lungs and on your skin, then it gets absorbed into the ground and ends up in the water.

Isn't the point of GM crops that they develop ones which don't need pesticides or other chemicals?

Oh no, the ones that Monsanto are testing in Hawaii are being designed to withstand huge amounts of pesticides!

Isn't the point of GM crops that they develop ones which don't need pesticides or other chemicals?

Oh no, the ones that Monsanto are testing in Hawaii are being designed to withstand huge amounts of pesticides!

2 minutes reading?  Do you ever manage to get through a whole book lol

sassy wrote:2 minutes reading?  Do you ever manage to get through a whole book lol

I can't even get through a whole episode of Corrie at the moment.

GM is dangerous and pesticides are poison.

Raggamuffin wrote:Roundup? I never use that - it leaves white marks.

What do you use?

Raggamuffin wrote:Roundup? I never use that - it leaves white marks.

What do you use?

Sometimes I use a weedkiller specifically for paths. I prefer not to use anything like that, but you fight a losing battle trying to pull up weeds sometimes. With Roundup, it takes ages to kill the weed anyway, and then you'd have to go round and get off all the white marks, so you might as well have pulled up the weeds by hand in the first place.
_________________

sodium chlorate.....use enough and nowt will grow there for years......

the solution is not to stop GM as humanity needs it and when used properly it is just fast tracking decades of selective breeding, the solution is to Stop Monsanto existing. they are Evil and Bad and subsequently they modify things for the profitability as opposed to the good of humanity. Also by the basic rule of thumb that the more lobbyists and more spent on lobbyist the more evil a group is.
_________________
My job is to travel the world delivering Chaos and Candy.

Today at 4:01 am by Original Quill

Today at 2:48 am by Original Quill

Today at 2:44 am by Original Quill

Today at 2:33 am by Original Quill

Today at 2:29 am by Original Quill

Yesterday at 11:57 pm by Original Quill

Yesterday at 11:32 pm by Original Quill

Yesterday at 9:15 pm by Original Quill