A rain storm in Alabama captured from inside of a hangar.

I've driven through some shit.

Once, I was driving in a thunderstorm, and lightning struck an electrical cable I was driving toward, sending movie-effect electricity rippling across the wire which I then drove *under* because I was a stupid teenager at the time.

Another time, I was quite a bit older and a storm blew in suddenly -- it blew a street sign near Texas Christian University all the way around before pelting down hail that made it impossible to see more than 10 feet. I rolled along, slowly and blindly, until I was able to find a parking lot with two tall vans that I could park between. I really thought there was a chance I would die during that one, I called my sister just so someone would know what was happening.
_________________
“If we extend unlimited tolerance even to those who are intolerant, if we are not prepared to defend a tolerant society against the onslaught of the intolerant, then the tolerant will be destroyed, and tolerance with them.”

I remember a holiday in Greece and it came down like that. I swear to God. It was daytime and we were stuck in it and I couldn't move and the water rose up around our ankles. I just stood there gasping for air, my hair plastered over my face like suffocating polythene. It was ghastly and quite scary. 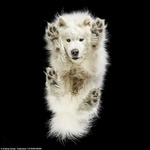 Yesterday at 2:39 pm by Original Quill

Yesterday at 8:24 am by Original Quill