I have been mourning that my beautiful, laid-back homeland should be so violated. We expect physical earthquakes, like the one that knocked down Christchurch back in 2011 and killed 185 people. We don’t expect to be shaken to pieces by terrorism. The last terrorist attack was back in 1985, when a couple of French agents blew up the Rainbow Warrior, with one casualty. 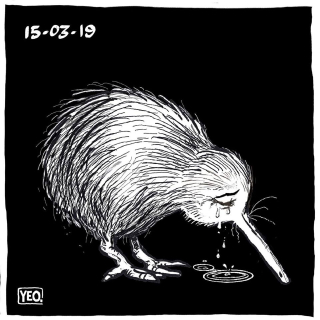 The country is trusting and easy-going and feels itself immune from invasion and terrorism, which is why the perp chose it. If he could strike New Zealand the massacre would get world coverage, as it did, and no country could then feel itself to be safe.

There is a redneck tendency in Christchurch but I am uncertain if it takes an organised form, and it is not known if he had helpers. It is also not yet known what kind of failure there was of surveillance and policing of a political movement that meets on-line instead of in cellars. He seems to have acted like Anders Breivik, as a lone show-off pretending to be a warrior for western civilisation. Why don’t these guys listen to Mozart or visit cathedrals to celebrate western civilisation?

I’ve read the statement by the alleged perpetrator. It’s standard fascism – ethnic cleansing with a whiff of master race, the re-creating of family life to bring up the birth rate, despising our society’s soft liberalism and hedonism, and love, over-powering love for violence and warriordom. There’s also a touch of eco-fascism. Mosely is cited, as is Breivik.

It’s hellishly cheeky for an Australian in New Zealand to complain of cultural and population take overs, which were inflicted on the indigenous populations of both countries, and where that colonisation is still a live issue.

David Toube of Quilliam, and once of this site, has an excellent piece of analysis on Radio Scotland.
He outlines the following:-


[*]The influence of Camus’ Great Replacement (see here for more detail) a theory that the European capitalists are conspiring to replace the white population. This is similar to the motivation behind the Pittsburgh synagogue shooting, where Jews were blamed for bringing in non-white people.

[*]The vision of the perp as a soldier in the 1000 year battle against Muslim invaders (he aspires for Istanbul to be restored to Constantinople and the Hagia Sophia to be turned back into a church though he has no belief in Christianity.) This battle runs up to the Bosnian conflict, with Serbian nationalists co-opted as allies.

[*]The far right symbolism which shows he is an ethno-nationalist rather than a cultural nationalist. He uses the black sun symbol as per Himmler as well as Odin’s cross and other neo-Nazi slogans. Do these people actually believe in Valhalla as ISIS believe in martyrs and 72 virgins?

[*]Like ISIS this kind of ideology works as inspiration for self-motivated atrocities rather than organisations of cells and members. This makes it difficult for would-be perpetrators to be tracked down.

[*]He uses the language of the meme outrage LULZ culture, and its revolting look-at-me, how-far-will-I go nihilism. There are in-jokes for the 8chan audience (Bellingcat analysis here and article by Ben Sixsmith here).

[/list]
Jason Burke has a piece on the similarity between the far right and Islamist extremists:-

Though there are substantial differences, rightwing and Islamist extremism, and extremists, share a great deal. The basic mechanics of the process of radicalisation – by peers, through the internet or otherwise – are very similar. As is the way both forms of violent activism are on the fringe of a much broader movement, much of which has bled into the mainstream in different parts of the world. There are no “lone wolves”, at least not in the sense of a solitary actor without links, whether virtual or real, to others.

“This is not New Zealand,” said the Prime Minister, Jacinda Ardern, who has acquitted herself well in an unprecedented situation for New Zealand leaders. It is now. Sadly, our modest kiwi exceptionalism has died.An

Australian Facebook friend pointed out that like Breivik the perp chose a country that wouldn’t torture him to death.  Despising liberal civilised countries for being soft, he chooses one that will be soft on him.)