Whales under threat as US approves seismic oil prospecting in Atlantic

Whales under threat as US approves seismic oil prospecting in Atlantic

• Sonic cannons to be used in ocean from Delaware to Florida
• Study estimates 138,000 sea creatures could be affected 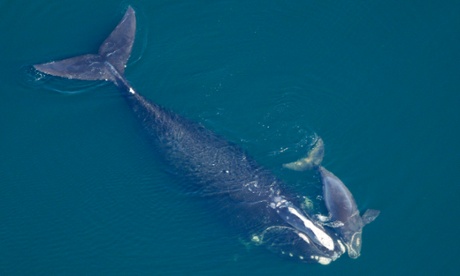 A north Atlantic right whale swims with her calf in the Atlantic Ocean, off the coast of Florida and Georgia.

The Obama administration is reopening the eastern seaboard to offshore oil and gas exploration, approving seismic surveys using sonic cannons that can pinpoint energy deposits deep beneath the ocean floor.

Friday's announcement was the first real step towards what could be a transformation in coastal states, creating thousands of jobs to support a new energy infrastructure. But it dismayed environmentalists and people who owe their livelihoods to fisheries and tourism.

The cannons create noise pollution in waters shared by whales, dolphins and turtles, sending sound waves many times louder than a jet engine reverberating through the deep every 10 seconds for weeks at a time. Arguing that endangered species could be harmed was the environmental groups' best hope for extending a decades-old ban against drilling off the US Atlantic coast.

The Bureau of Ocean Energy Management acknowledged that thousands of sea creatures will be harmed even as it approved opening the outer continental shelf from Delaware to Florida to exploration. Energy companies need the data as they prepare to apply for drilling leases in 2018, when current congressional limits expire.

"The bureau's decision reflects a carefully analysed and balanced approach that will allow us to increase our understanding of potential offshore resources while protecting the human, marine, and coastal environments," the acting BOEM director, Walter Cruickshank, said in a statement.

Sonic cannons are already used in the western Gulf of Mexico, off Alaska and in other offshore oil operations around the world. They are towed behind boats, sending down pulses of sound that reverberate beneath the sea floor and rebound to the surface. Hydrophones capture the results, which computers translate into high-resolution, three-dimensional images.

"It's like a sonogram of the Earth," said Andy Radford, a petroleum engineer at the American Petroleum Institute, an oil and gas trade association in Washington DC. "You can't see the oil and gas, but you can see the structures in the Earth that might hold oil and gas."

The surveys can also map marine habitats and identify solid undersea flooring for wind energy turbines. But fossil fuel mostly funds this research, and corporations keep the data secret, disclosing it only to the government.

"They paid for it, so I can see why they don't want to share. These things are not cheap," said John Jaeger, a University of Florida geology professor.

Oil lobbyists say drilling for the estimated 4.72 billion barrels of recoverable oil and 37.51 trillion cubic feet of natural gas that lies beneath federal waters from Florida to Maine could generate $195bn (£114bn) in investment and spending between 2017 and 2035, contributing $23.5bn a year to the economy.

These estimates describe the total amount of energy "technically recoverable" from the nation's outer continental shelf, but the Atlantic seabed from New Jersey through New England remains off limits for now. While some states have passed drilling bans, Virginia and the Carolinas asked for the surveys, bureau officials explained on Friday.

"I honestly feel we can go offshore and harvest the energy that's out there," said the South Carolina state senator Paul Campbell. "I think we're kind of foolish not to."

In any case, the area to be mapped is farther offshore in federal waters, beyond the reach of state law.

The sonic cannons are often fired continually for weeks or months, and multiple mapping projects may operate simultaneously. To get permits, companies will need to have whale-spotting observers on board and do undersea acoustic tests to avoid nearby species. Certain habitats will be closed during birthing or feeding seasons.

Still, underwater microphones have picked up blasts from these sonic cannons over distances of thousands of miles, and the constant banging — amplified in water by orders of magnitude — will be impossible for many species to avoid.

Whales and dolphins depend on being able to hear their own much less powerful echolocation to feed, communicate and keep in touch with their family groups across hundreds of miles. Even fish and crabs navigate and communicate by sound, said Grant Gilmore, an expert on fish ecology in Vero Beach, Florida.

"We don't know what the physiological effects are. It could be permanent hearing damage in many of these creatures just by one encounter with a high-energy signal," Gilmore said.

More than 120,000 comments were sent to the government, which spent years developing these rules. The bureau's environmental impact study estimates that more than 138,000 sea creatures could be harmed, including nine of the world's remaining 500 north Atlantic right whales.

These whales give birth and breed off the coast of Florida, Georgia and the Carolinas.

"Once they can't hear – and that's the risk that comes with seismic testing – they are pretty much done for," said Katie Zimmerman, a spokeswoman for the South Carolina Coastal Conservation League based in Charleston.

By federal law, scientists cannot approach marine mammals without following careful protocols, and yet this decision will pervade their environment with noise pollution that could have a long-term impact on their population, said Scott Kraus, a right whale expert at the John H Prescott Marine Laboratory in Boston.

"No one has been allowed to test anything like this on right whales," Kraus said. "[The Obama administration] has authorised a giant experiment on right whales that this country would never allow researchers to do."

Some exploratory wells were drilled before the US Atlantic seabed was closed to exploration in the 1980s, but they never produced much. The latest seismic technology should change that.

"One thing we find is, the more you get out and drill and explore to confirm what you see in the seismic – you end up finding more oil and gas than what you think is out there when you started," Radford said.

"Florida has already felt the devastating effects of an uncontrolled oil release with the Deepwater Horizon event of which cleanup efforts are still ongoing," said John Morris, a county commissioner whose constituency includes the beach town. "Any oil spill, large or small, off the coast of St Johns County, would greatly affect the county's economy."

FGS!!!!! Is there nothing the world will not do in it's unending quest for oil?

Re: Whales under threat as US approves seismic oil prospecting in Atlantic

I once thought we'd start turning to alternative energy sources (including nuclear, which is much safer in its modern incarnation than it once was -- which was still pretty safe) once we started to deplete the largest oil reservoirs and gas pockets.

Now I'm starting to think some of us will have to drill all the way to the core before we give the obsession up ... which has really been a very short-lived phenomenon, actually -- we've really only seriously exploited fossil fuel resources for a little over 100 years, and we're already running out.

In the meantime, there will always be those who just can't seem to see the point of having whales and whatnot