Israel at war with US Congress

Israel at war with US Congress

WGBH wrote:Israel Bans Two U.S. Congresswomen From Visiting The Country Based On Their Views Of Palestine

JERUSALEM (AP) — Israel’s prime minister and other top officials were meeting on Thursday to reevaluate the decision to allow two Democratic congresswomen who support the Palestinian-led boycott movement to enter the country next week. Reports say officials have decided to bar two U.S. Congresswomen from visiting the country.

An Israeli official said they were meeting about an upcoming visit by Rep. Ilhan Omar of Minnesota and Rep. Rashida Tlaib of Michigan. The newly-elected Muslim members of Congress are outspoken critics of Israel’s treatment of the Palestinians. Tlaib’s family immigrated to the United States from the West Bank.

The official, speaking on condition of anonymity in line with regulations, said “there is a possibility that Israel will not allow the visit in its current proposed format.”

While Israeli officials weighed the issue, President Donald Trump tweeted that “it would show great weakness” if Israel allowed them to visit. “They hate Israel & all Jewish people, & there is nothing that can be said or done to change their minds,” the president wrote Thursday, calling the two congresswomen “a disgrace.”

Israel has sought to combat the so-called BDS movement, which advocates boycotts, divestment and sanctions against Israeli businesses, universities and cultural institutions. The country passed a law permitting a ban on entry to any activist who “knowingly issues a call for boycotting Israel.”

Supporters of the boycott movement say it is a non-violent way to protest Israeli policies and call for Palestinian rights. Critics say the movement aims to erase Israel and replace it with a single binational state.

Israel often hosts delegations of U.S. representatives and senators, who usually meet with senior Israeli officials as well as Palestinian officials in the occupied West Bank. Last month, Israeli ambassador to the U.S. Ron Dermer said Israel would not deny entry to any member of Congress.

A decision to ban the congresswomen could further sharpen divisions among U.S. Democrats over Israel ahead of the 2020 elections. Republicans have amplified the views of left-wing Democrats like Tlaib and Omar to present the party as deeply divided and at odds with Israel. Democratic leaders have pushed back, reiterating the party’s strong support for Israel, in part to protect representatives from more conservative districts.

In July, the Democratic-led House of Representatives voted overwhelmingly in favor of a resolution against the BDS movement.

Tlaib and Omar have also been the target of repeated attacks by President Donald Trump in recent months, including a series of racist tweets on July 14 in which he said they should “go back” to the “broken” countries they came from. Both are U.S. citizens and Tlaib was born in the United States. The two are members of the so-called “Squad” of newly-elected left-wing Democrats, along with Reps. Alexandria Ocasio-Cortez of New York and Ayanna Pressley of Massachusetts.

Politicians and former diplomats spoke out against barring the congresswomen from visiting following an unconfirmed report that Israel had resolved to bar Omar and Tlaib from entering the country.

Former U.S. Ambassador to Israel Dan Shapiro wrote on Twitter that the decision to bar their entry “harms Israel’s standing in the U.S., boosts BDS.”

Israeli lawmaker Ayman Odeh, leader of the Joint List of Arab parties, criticized the move, writing that “Israel has always banned Palestinians from their land and separated us from other Palestinians, but this time the Palestinian is a U.S. Congresswoman.”

The Democratically controlled Congress is considering options in response. They are in a position to defund any aid to Israel by the United States, by simply declining to pass any budget that contains support for Israel. In addition, since the courts have approved cutting off travel from certain states, they might consider cutting off all travel to/from Israel.

For now, senior Democratic members of Congress are considering legislative action against Ron Dermer, Israel’s ambassador to Washington, and David Friedman, the U.S. ambassador to Israel, according to McClatchy.

Bill Maher mocks Rashida Tlaib's 'boycott': 'Some people have one move only'

Bill Maher is firing back at Rep. Rashida Tlaib after the Democratic politician from Michigan suggested viewers boycott his show, "Real Time with Bill Maher."

In a tweet Wednesday, Maher shared a clip from his Aug. 16 show discussing Tlaib's support of the BDS movement calling for boycotts, divestment and sanctions against Israel.

"Some people have one move only: boycott. Cancel. Make-go-away," he tweeted. "But here’s the thing, the house voted 318 to 17 to condemn the #BDS movement, including 93% of Dems. Does Tlaib want to boycott 93% of her own party?"

Tlaib spoke out against Maher following his Friday episode of "Real Time," in which he slammed Tlaib and Rep. Ilhan Omar for their vocal criticism of Israel over its treatment of Palestinians.

"Maybe folks should boycott his show," she wrote. "I am tired of folks discrediting a form of speech that is centered on equality and freedom. This is exactly how they tried to discredit & stop the boycott to stand up against the apartheid in S. Africa. It didn't work then and it won't now."

Israeli Prime Minister Benjamin Netanyahu previously announced that Omar and Tlaib were barred from entering the country ahead of a planned trip to visit Jerusalem and sites in the West Bank, saying that the two members of Congress were "planning a campaign whose sole purpose was to strengthen the boycott and negate Israel's legitimacy."

After Israel changed course and said Tlaib would be allowed to enter the West Bank on humanitarian grounds to visit her Palestinian grandmother, Tlaib announced in a tweet that she would be declining the invitation due to conditions placed on her trip

Except Israel never placed any restrictions on her meeting her grandmother. She herself said she would 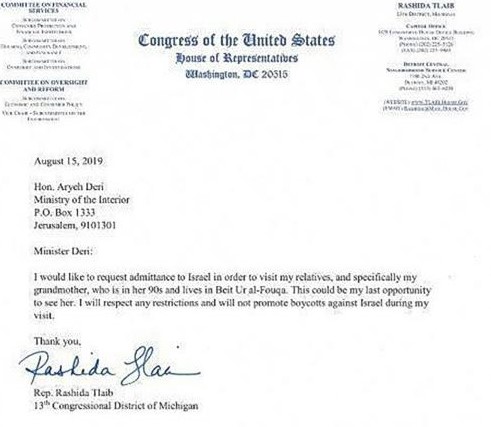 phil wrote:Bill Maher mocks Rashida Tlaib's 'boycott': 'Some people have one move only'

Yeah.  He's in a pissing match with her.

But keep your eye upon the doughnut, and not upon the hole...I'm bettin' this election (2020), the Dems end up with the House, Senate and WH.  There's a strong possibility that they will end all aid to Israel.

At a minimum, they will end it as long as Netanyahu is in charge.  He's a one issue PM: Lebensraum!  Until they have a plan for meaningful peace, there should be no more money forthcoming.
_________________
“Little thieves are hanged, but great thieves are praised.” — Old Russian proverb, offered by Vladimir Putin to Donald J. Trump, Helsinki, July, 2018.

There's been plenty of offers of peace, the Arabs don't want it, they get loads of money from stupid people who think it's Israel's fault there's no peace !

So? Trump supports white terrorism. It's nothing new. Everyone's got their favorite.

But...follow the money. The Democrats now have the House, and it looks favorable for the Senate and WH as well. If the Dems take over, there is a high probability that Israel loses $138-Billion that would otherwise go to Lebensraum.

nicko wrote:There's been plenty of offers of peace,  the Arabs don't want it,  they get loads of money from stupid people who think it's Israel's fault there's no peace !

Spot on mate. There could have been a palestinian state numereous times. They chose hate instead of living side by side in peace
That is why the conflict continues today, as it has done from the very start.

Antisemitism
For 2,000 years we’ve linked Jews to money. It’s why antisemitism is so ingrained

phildidge wrote:
Antisemitism
For 2,000 years we’ve linked Jews to money. It’s why antisemitism is so ingrained

This time it goes the wrong way.  The US is the rich banker and Israel is the panhandler being given the money...for who knows what purpose.  If anything, this is pro-semitism.

Today at 2:37 am by Original Quill

Yesterday at 7:47 pm by Vintage

Yesterday at 7:20 pm by Brutus

Yesterday at 5:59 pm by Original Quill