The Conservatives are heading for another embarrassing public relations disaster after it was revealed that Jacob Rees-Mogg has invested millions of pounds in a blacklisted Russian bank.

Sberbank, based in Russia, is currently under EU and US sanctions, imposed over the annexation of the Crimea by Russia in 2014.

Note also that the bank extended a huge line of credit to the Trump Tower developer. All in it together?

Jacob Rees-Mogg's firm invested in a blacklisted Russian bank. Sberbank is subject to sanctions by the US and EU (Reg. 833/2014.)  The sanctions are for bombing civilians in Syria, hacking elections, murdering people aboard holiday jets or on our streets is unacceptable. 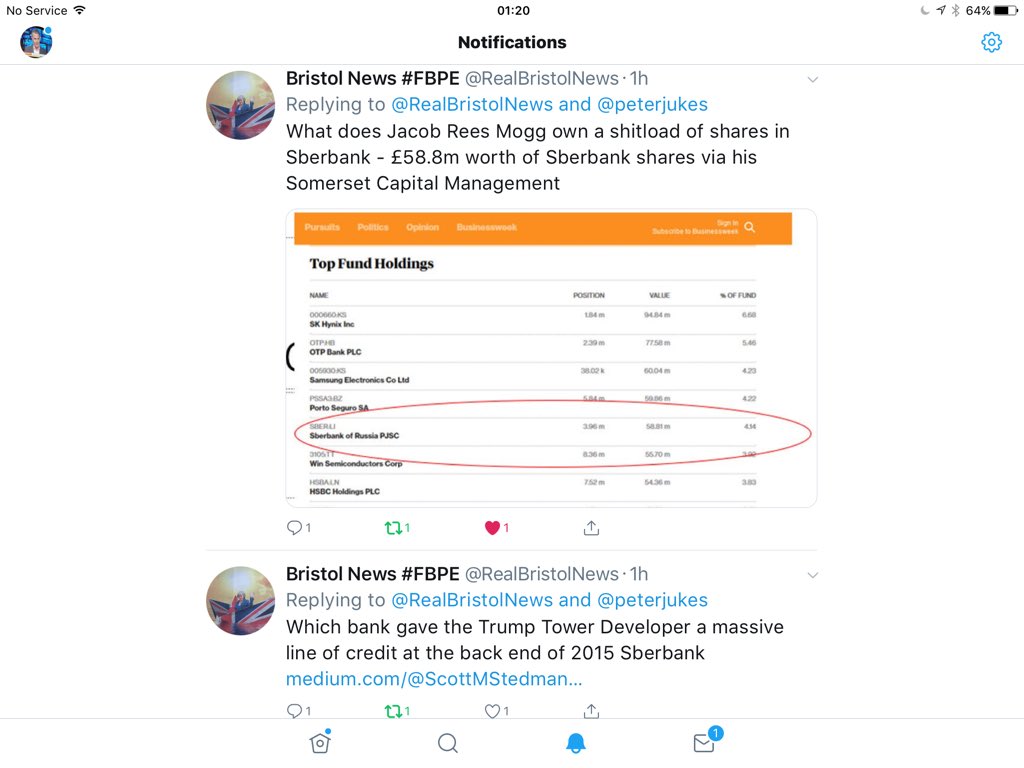 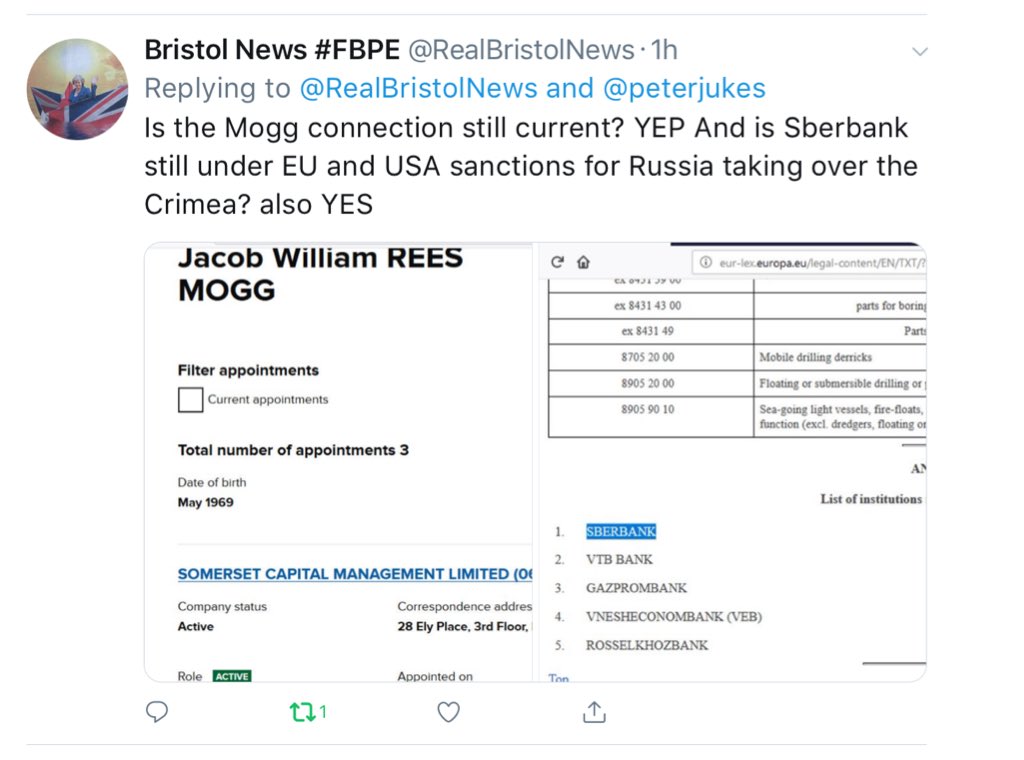 Somerset Capital Management is also involved in tax-dodging, it appears:

Rees-Mogg's Somerset Capital Management LLC paid his limited company over £7m last year for "management charges". The LLC has a subsidiary in the Caymans and manages funds based in tax haven Delaware.

Meanwhile, two-faced Mr Rees-Mogg is sabre-rattling against his Russian business partners, claiming the UK should have a permanent base in the Baltics “to show Vladimir Putin that the West will not be ‘bullied’ by the Kremlin”.

Not only that, but he has said Britain should call on the Republic of Ireland to leave the EU single market and customs union as a way of avoiding a hard border with Northern Ireland.

Now has this MP done anything illegal here?

Was the investment before the sanctions?

Let that sink in. They accuse Corbyn, they take £3mill from Putin's oligarchs, who have already paid £1mill each for visas, Tory MPs accept private buns from them, Boris takes £160,000 to play tennis with them, Gavin Williamson take £30,000 to have dinner with them (that was only a month ago) and Rees Mogg has millions invested in a Russian bank, a sanctioned bank,

Jacob Rees-Mogg's firm invested in a blacklisted Russian bank. Sberbank is subject to sanctions by the US and EU (Reg. 833/2014.) The sanctions are for bombing civilians in Syria, hacking elections, murdering people aboard holiday jets or on our streets is unacceptable.

And let's not forget Tory Friends of Russia


And while we are at it, from Hansard, what Corbyn ACTUALLY said in HOC.


It is in moments such as these that Governments realise how vital strong diplomacy and political pressure are for our security and national interest. The measures we take have to be effective, not just for the long-term security of our citizens but to secure a world free of chemical weapons. Can the Prime Minister outline what discussions she has had with our partners in the European Union, NATO and the UN and what willingness there was to take multilateral action? While the poisonings of Sergei and Yulia Skripal are confronting us today, what efforts are being made by the Government to reassess the death of Mr Skripal’s wife, Liudmila, who died in 2012, and the deaths of his elder brother and son in the past two years?

We have a duty to speak out against the abuse of human rights by the Putin Government and their supporters, both at home and abroad, and I join many others in this House in paying tribute to the many campaigners in Russia for human rights, justice and ​democracy in that country. We must do more to address the dangers posed by the state’s relationship with unofficial mafia-like groups and corrupt oligarchs. We must also expose the flows of ill-gotten cash between the Russian state and billionaires who become stupendously rich by looting their country and subsequently use London to protect their wealth. We welcome the Prime Minister today clearly committing to support the Magnitsky amendments and implementing them as soon as possible, as Labour has long pushed for.

Yesterday Nikolai Glushkov, a Russian exile who was close friends with the late oligarch Boris Berezovsky, was found dead in his London home. What reassurances can the Prime Minister give to citizens of Russian origin living in Britain that they are safe here?

The events in Salisbury earlier this month are abominable and have been rightly condemned across the House. Britain has to build a consensus with our allies, and we support the Prime Minister in taking multilateral and firm action to ensure that we strengthen the chemical weapons convention and that this dreadful, appalling act, which we totally condemn, never happens again in our country.

How many of these far left sites, is sassy going to post?

Again is anything he has done illegal?

He has called for harsh measures against russia, which could lose him personally millions

So what is the point here?

What he fainnacially does as a person is not anything to do with the Tory Party. Its his own buisnesses. Its not being done by the Tory party

Could you slur that again , Didge?

It's the OFFICIAL LEGAL GOVERNMENT RECORD.

Go and join rehab with Ant.

Angry Andy wrote:Hansard?
Could you slur that again , Didge?

For fucks sake you deranged piss head.
Its the OFFICIAL LEGAL GOVERNMENT RECORD.

Go and join rehab with Ant.

Its his personal buisness you dick head

For the 100th time, I do not drink you pathetic little weasel all tough behind your PC.

Now was anything he did illegal

Are you also happy sassy is using the views of a holocasust denier and antisemite, who has been thrown out of labour?

Its also not blacklisted in the UK

Yet again sassy posting fake news, from a holocast denier

I thought Ben was going to come down hard on this

Today at 3:57 am by Original Quill

Yesterday at 5:58 am by Tommy Monk